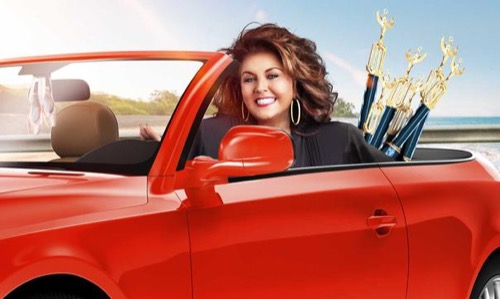 Tonight on Lifetime Dance Mom returns with an all-new Tuesday, November 29, 2016, season 7 premiere and we have your Dance Moms recap below. On tonight’s Dance Moms Season 7 Episode 1 Premiere “Fight for Your Life,” in the seventh-season premiere, Abby invites the junior-elite team’s moms to visit the ALDC to hear a major announcement.

Did you miss the last episode of Dance Moms where in the Season 6 finale, the elite team faced off against Abby and her mini team for the first time ever at a competition? If you did we have a full and detailed Dance Moms recap of the last episode, right here for you!

On tonight’s Dance Moms Season 7 Episode 1 as per the lifetime synopsis, “Abby Lee Miller and the nation’s favourite tween dancers take on Hollywood in this all-new season of ‘Dance Moms’. New auditions, new competitions and new dance studios raise the stakes higher than ever before.“

#DanceMoms starts with the moms talking about Abby and what to do. Kira says their girls needed time away. It’s been two months since the last competition and they’re back in LA because Abby called them there to talk.

Ashlee asks if there are reasons to go back to ALDC. Jill says when the kids stopped winning, she went to the minis. Kira says Abby won’t apologize but she needs them. Ashlee says they should talk to her and see if she’s ready to care about the kids.

Over at ALDC LA, Abby sits alone in the studio when the junior moms show up. The moms come into Abby’s messy office and she says look what the cat dragged in. Abby has been thinking about what the moms did to her.

Abby says they should not have allowed their kids to go against their teacher. Jill says she turned her back on them and sabotaged them. Abby says she did not. Jill says do you want them at the studio or not. Abby says if the girls are proud to be here, they are welcome.

Abby agrees that she wants them. Ashlee thinks they tried and failed to compete without Abby. Abby says she has an announcement the girls need to hear but has something to say to the minis first. Abby hugs the minis and mini moms.

Abby tells them she trained the junior team and feel like she needs to teach those kids not to be quitters. She says she doesn’t know if her lessons with them are over. The elite moms talk to the girls about Abby and maybe coming back.

Abby says the minis had a good run then stops and calls in the junior team. The mini moms are stunned. Tiffanie thinks it’s ridiculous they came back. Another mini mom says the junior moms talked about Abby and Holly confronts Stacey about her ratting them.

Stacey is bitter and says it’s not fair. Abby says the two teams didn’t work out well and it was chaos. She says Kerri refused to wear a costume. She says they are stifling her creativity and she won’t be split in half. She says it’s too much stress and aggravation.

Abby says at the end of the week, she’s going to send some of them home. She says she will have one competition team. She says think about it. She says your actions over the next few days will determine who stays and who goes.

Jill says this is what they want – one team to get her attention. Jill doesn’t want any minis on the team. Abby says they’re going to Las Vegas this week and they have two solos. She gives Kendall and Brynn the solos.

Kendall’s is about Cleopatra. Brynn’s is about Evita Peron. The group routine is called Fight Camp. Kendall asks if they’re dancing with the minis and Abby says yes. Kendall expected to be on probation so she’ll take this.

Abby says she will send some of them home. She says everyone has an equal chance. She wants kids who love what they’re doing. She says if you’re too young, too old, or have too many opportunities. Kerri takes her kid and walks out and says “thank you for your time.”

Jill says if Abby doesn’t like you, she makes it miserable for your child. Jill thinks Kerri did right walking out with Payton. Jill says she knows that Abby will cut her anyway since Aby has called her trash so many times and she won’t be talked to like that. Abby says one down.

Abby starts group rehearsal for the fight themed dance. Abby wants to see how much fight they have in them. The moms talk and Ashlee says she wants to see who wants to be here. Holly says she knows Abby will keep some of the minis.

Abby talks to Brynn and Kendall and tells them rivalry is helpful. Abby says ALDC won 14 times in a row because of a rivalry and wants those glory days back. She starts with Brynn on her Evita solo. Ashlee says Brynn is Abby’s winning soloist but still worries she’d cut her.

Ashlee says Brynn knows she has to prove herself. Ashlee talks about Nia and Kalani moving on to professional careers and Abby wants someone to stay there and be counted on to win at competition. Jill reminds her she thought Brynn was the new Maddie.

Jill is aggravated with Ashlee but wants to focus on the team because she thinks Kendall might be cut even though it would be bad for Abby but Abby doesn’t always do what’s good for her. Abby starts Kendall’s solo rehearsal.

Jill says the problem is that Abby sets her up. Ashlee says she worries about Jill. Then Jill goes off and walks out. Holly says some words trigger Jill like putting Brynn and Kendall in the same sentence. She walks out mad.

It’s the last day of rehearsals and Abby isn’t happy with the group routine. Jill says this is their last chance as a team to stay. Stacey says her daughter is smallest and could be cut. Holly says Abby is looking for weak links.

They load up on the bus and head to Sheer Talent in Las Vegas. The crowd of fans are there to greet them. Abby tells the mini moms they don’t need to be in the room until after lunch since their kids don’t have solos.

She thinks Abby is trying to upset the mini girls so they won’t perform well and will be cut. Nia says she’ll be upset if Abby cuts her since she’s been with her for 12 years. Kira says they have worked so hard to be there and gave up their entire childhood.

Abby finds the mini moms talking. Stacey says her daughter told her she doesn’t understand and will throw her out like trash. Abby says those kids are just jealous. Ashlee comes to get Abby and rescue them from the mini moms.

Jill says you’re out here where you belong and Holly says why would you tell them that our kids will be jealous. Abby denies it and Stacey insists she said it. We see a replay of Abby saying it. Stacey says there are two Abbys and in medical terms, you call it koo koo.

Abby has last minute words for her soloists and Jill is annoyed that Abby gave Kendall a giant headpiece and another prop too. Brynn performs first. It goes well and Jill knows it. She says Abby made sure to give Brynn the advantage.

Kendall gets into her chair and is carried onto the stage. She starts her routine working around the headpiece and with the big chair. Jill is happy when the number is over and Nia tells her it’s really good. Jill thinks it was amazing.

Jill asks Abby if she’s basing cuts on the solos and says she’s brought the kids so far and it would be a shame to break that up. Jill wonders if Abby is just out for revenge for them leaving her. Abby gives notes on the combined group number.

She says she needs to show them that they have fight in them. Abby says it’s embarrassing for her students to show up with another routine from another choreographer. Jill thinks Abby will never let them live it down even though she gave them no choice.

Abby pulls faces during the group routine. Holly says Abby is silent and it’s not a good sign. Yolanda thinks the elite moms are blaming their kids for the routine not going well. She says if they don’t win, she knows the minis will be blamed.

Kendall takes 3rd place in the teen solos. Brynn takes first place for her solo. Ashlee loves this and says she knows Abby will make cuts and you can’t predict what she will do so everyone should be ready. Now the group awards.

The girls win 1st place for the group solo. Holly says this was a good day but now they have to face cuts. She says there’s no guarantee of safety. Jill tells Tiffanie she doesn’t think she’s safe. Tiffanie prods her and Ashlee says stop being such a bitch.

Jill agrees that Tiffanie is a bitch for attacking their kids constantly and being envious. A mini mom calls Jill a miserable bitter old lady. The girls come in and Abby lines them up. She says she’s supposed to cut people today.

Who will be cut?

Stacey says please remember who was committed and who walked out. Abby says maybe she’s better with the minis. Abby is torn and wants one cohesive team. She knows she has to cut kids who didn’t do anything wrong like the elite team did.

Abby tells them she’s torn and says she needs to throw up. Abby starts crying and says she’s not ready to make this decision right now. She walks out without telling them their feet. The mini kids are all crying on their moms.