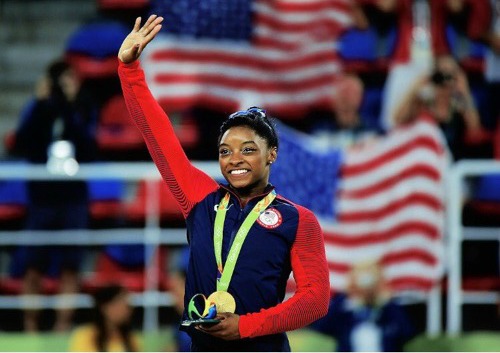 Dancing With the Stars’ producers reveal that Simone Biles, an American Artistic Gymnast currently participating in the Rio de Janeiro 2016 Olympics, is their number one choice to join the cast of upcoming Season 23. During the 2016 Olympics, she has become a gymnastics hero, having won four gold medals and one bronze medal; making her the most decorated American gymnast. Simone could definitely give any of the contestants a run for their money if she were to join the show.

So from Brazil to the Ballroom? An insider for the show says that Simone Biles, 19 is producers’ top pick among this year’s stand-out Olympians to show off her fancy footwork. The source goes on to say that of course, they would love to cast some Olympians but points out that the ABC competition dance series’ team is waiting until after the games are done to see which athletes stood out and have a huge fan base.

If Simone Biles agrees to enter the competition in hopes of earning the coveted Mirrorball Trophy, there is no doubt she would become an instant fan favorite and front-runner. The obvious success rate of previous Olympic champions being on the show, she may very well become the winner of Season 23.

Simone would be following up behind other great athletes like, Speed skater Apolo Ohno who won Season 4. Gymnast Shawn Johnson who won Season 8, and was the runner-up in the All-Star Season 15. Ice Dancer Meryl Davis who ended up on top in Season 18, and Simone’s U.S. gymnastics teammate Aly Raisman came in fourth place in Season 16.

The current reigning “Mirrorball” champ, Nyle DiMarco ended up on top after defeating UFC star Paige VanZant in the Season 22 finale. Which 2016 Olympians would you like to see compete on Dancing with the Stars? The full list of Season 23 participants will be announced on Tuesday, August 30th on Good Morning, America. DWTS’ Season 23 premieres on ABC on Monday, September 12th at 8 p.m. ET.