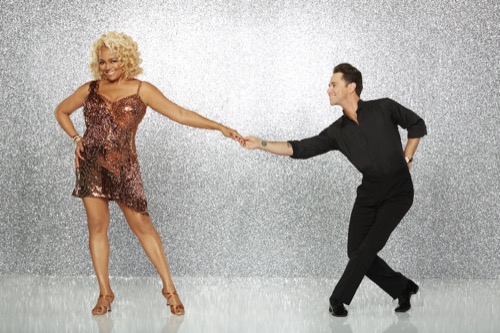 Dancing With The Stars Season 22 contestant Kim Fields is going to have a lot more time to perfect her cha-cha, because she just quit Real Housewives Of Atlanta. Rumors have been teasing for over a week now that Fields was leaving Bravo’s RHOA, and the actress turned reality TV star turned ballroom dancer has confirmed the news.

On Tuesday March 22 Kim Fields appeared on The Rickey Smiley Morning show to discuss her performance on the season premiere of Dancing With The Stars. The radio hosts asked Kim Fields if the rumors were true and she was leaving RHOA.

Kim dished, “I’m done. Think back to the beginning of the season, [and] what my momma said–’Get in and get out.’ Listen to your momma. It was for the experience. It was to be able to do a genre that I was asked to before, and…overall, it was a really great experience.”

Fields made her debut on Real Housewives of Atlanta in 2015 on Season 8, and apparently one season was enough for her – of course her drama with the other women probably didn’t help matters any.

Although previous reports indicated that Bravo was firing Fields, the DWTS competitor implied during her radio interview that she was the one who had decided to part ways the reality TV show.

Real Housewives seem to have a bit of a stigma on Dancing With The Stars, but Kim Fields carried her own last night during the season 22 premiere with her partner Sasha Farber. And now that she is done with RHOA, she will have even more time to rehearse and perfect her dances and she could make it pretty dar in the competition.

So RHOA fans, are you surprised that Kim Fields is leaving Real Housewives after just one season? Let us know what you think in the comments below and make sure to come back to CDL for all your DWTS news, recaps dances and goosip!