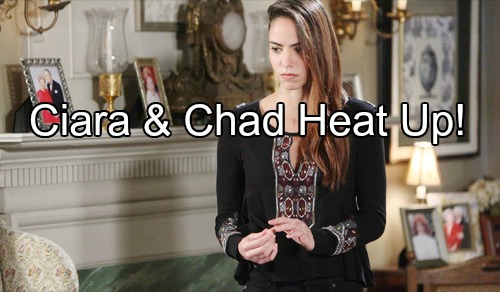 “Days of Our Lives” (DOOL) spoilers for Tuesday’s episode, June 7, tease that Kate (Lauren Koslow) will spill her story to a shocked Roman (Josh Taylor). She’ll fill him in on Nicole’s (Arianne Zucker) fight with Deimos (Vincent Irizarry) near the river. Kate will tearfully explain that her “husband” was killed when Nicole rammed his head into a tree and rolled him in the river.

She’ll play the part of a grieving widow as Roman tries to make sense of all this.

Of course, DOOL fans know that there’s very little truth to Kate’s tale. Nicole only gave Deimos a slight push before she stormed off. Kate was the one who gave Deimos an epic shove, which resulted in a massive blow to the head. Then, Deimos simply stumbled over to the edge and finished off the scene with a splash.

Nevertheless, Kate has video proof of Deimos and Nicole’s quarrel. That’s going to make Nicole look extremely guilty. As for the marriage portion of Kate’s claims, she’ll have to make a dirty deal if she wants that to hold up in court.

“Days of Our Lives” spoilers say Kate will go to Aiden (Daniel Cosgrove) for help. Apparently, Kate has some dirt on Aiden and it’s awfully juicy. Aiden desperately wants a second chance with Hope (Kristian Alfonso), but he won’t get it if Kate blabs something incriminating.

Aiden will have no choice but to give into Kate’s demands. He’ll falsify some documents to prove that Deimos and Kate are legally married. That means Kate will inherit all of Deimos’ assets. Later this week, Nicole will be stunned by the web Kate has weaved. She’s going to have a tough time getting out of this mess.

Other “Days” spoilers indicate that Ciara (Vivian Jovanni) will cozy up to Chad (Billy Flynn) at the DiMera mansion. As Chad battles heartbreak and a hangover, Ciara will believe she’s just what he needs. DOOL viewers can expect things to heat up between Chad and Ciara, which sounds like a terrible idea.

Let’s hope Chad can get a grip soon.

Elsewhere, Blanca (Ximena Duque) will make her first appearance and she’ll definitely catch Rafe’s (Galen Gering) eye. Adriana (Alma Delfina) would love for these two to hit it off and they will. Could that lead to something more? We’ll have to wait and see, but it’s clear that Rafe and Hope are endgame.

Bo (Peter Reckell) will always be Hope’s true love, but Rafe is the man with his blessing. The “Rope” train may get delayed or derailed, but it should get back on track eventually. Stick with “Days of Our Lives” for updates on what’s in store.

So “Days” fans, what do you think about the news that Kate make it look like she’s married to Deimos? Will Kate’s plans go awry when Deimos survives his accident? Are you disappointed with the direction Chad and Ciara are headed in? Will Rafe be tempted by Blanca?