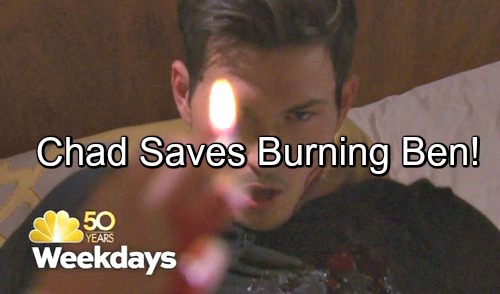 “Days of Our Lives” (DOOL) spoilers reveal that Abigail (Kate Mansi) will feel like there’s only one way to get Ben (Robert Scott Wilson) out of her life for good. When Ben appeared at the mansion, he told Abigail that he wanted to be together. Abigail will prey on that desire by luring Ben to the bedroom.

After seducing him, Abby will knock Ben out and tie him to the bed posts. She’ll end up stabbing Ben at some point during the ordeal, but that won’t be enough. Abigail wants Ben to suffer for everything he’s done. Ben killed Abigail’s cousin, Will (Guy Wilson).

Then, Ben beat Chad (Billy Flynn) into a coma and held a pregnant Abigail hostage. As the icing on the cake, Ben stole Abigail’s baby and left her to burn in a fire with Chad. It’s no wonder Abigail has been driven to the edge of insanity.

Now it’s time for retribution. DOOL viewers won’t want to miss Abigail’s vengeful turn. Abby is done playing Ben’s mind games. She’s ready to move on with her life. “Days of Our Lives” spoilers say Abigail will be determined to make Ben pay the price for his ruthless actions on new episodes this week and next week.

She’ll strike a match and fling it towards the gasoline-soaked bed.

Once the fire is lit, the flames will quickly engulf Ben’s body. He’ll be in agony as he cries out for help. “Days” spoilers tease that Chad will be shocked when he sees what Abigail has done.

After making sure Abigail and Thomas are safe, Chad will decide he has to do the right thing. He’ll rush in and save the man who tried to kill him.

Days of Our Lives spoilers say that Ben will survive, but he won’t be out of the woods yet. He’ll be covered in severe burns from head to toe. DOOL spoilers indicate that Chad will be worried about Abigail’s mental state, but he’ll try keep her role in the blaze under wraps.

The guards in Salem are notorious slackers, so we don’t have high hopes for Ben’s security in his hospital room. Abigail or anyone else with a vendetta could easily walk in and finish the job.

It should be interesting to see how Ben’s storyline comes to a close. Stick with “Days of Our Lives” for updates on the rest of the mayhem.

So “Days” fans, what do you think about the news that Abigail will set Ben on fire? Where will the story go from here? Will Abigail completely unravel after this nightmare?