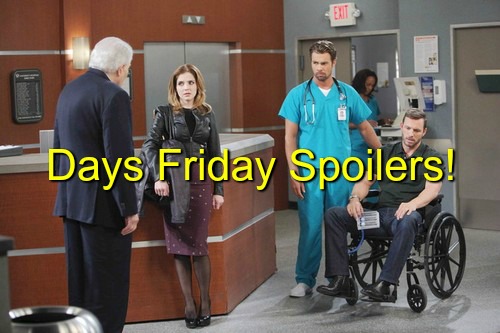 “Days of Our Lives” spoilers for Friday, January 29, tease that Nicole (Arianne Zucker) will give Eric (Greg Vaughan) a piece of her mind. Nicole already lashed out at Eric just before he was arrested, but it seems Eric still wants to express his condolences. Eric stopped by the apartment and Nicole is about to blow up. She’ll rip into Eric for taking Daniel (Shawn Christian) from her and leaving her all alone.

Eric realizes that he can’t fix his tragic mistake. All he can do is apologize and hope Nicole will find a way to forgive him one day. DOOL spoilers suggest that day could come, but it’s going to be a while before Nicole truly pardons Eric’s actions. Stay tuned to see if Eric can ever make amends.

Elsewhere, Brady (Eric Martsolf) will try to get to the bottom of his latest dream. “Days” viewers know that Brady keeps having strange visions that feel like memories. Brady did some research online and asked Nicole a few questions about what he saw. Now it’s time to dig a little deeper by talking to Fynn (Alexander Bruszt).

“Days of Our Lives” spoilers say Brady will get Fynn to open up about when he was living in California with Daniel. Brady remembers a beach in Malibu as well as a particular song. Fynn will be intrigued by what Brady shares. It looks like this mystery will deepen soon. Brady will start to dream of a woman from Daniel’s past and it could lead to several surprising revelations.

Other DOOL spoilers indicate that Ciara (Vivian Jovanni) will learn a shocking secret about Chase (Jonathon McClendon) while they’re staying at the Horton cabin. Since next week’s spoilers say Ciara will scold Chase for it, there’s a good chance he’s Theo’s (Kyler Pettis) bully. Ciara will be furious if she discovers Chase is to blame for Theo’s heartache.

Meanwhile, Andre (Thaao Penghlis) will sneak into Hope’s (Kristian Alfonso) house to have a look around. Andre recently found Stefano’s (Joseph Mascolo) body and he’s certain that Hope was the one who killed him. Andre will rummage through Hope’s home until he finds the murder weapon. Will this mean bad news for Rafe (Galen Gering) and Hope’s cover-up plan? Stick with “Days of Our Lives” for updates on their struggle to keep things quiet.

So “Days” fans, what do you think about Eric reaching out to Nicole? Will Brady gather more clues about his dreams? Will Ciara learn that Chase has been targeting Theo? Is Hope in major trouble? Voice your opinion in the comments below and don’t forget to check CDL often for the latest “Days of Our Lives” spoilers, updates and news.