BY Heather Hughes on May 25, 2016 | Comments: one comment
Related : Days of Our Lives, Soap Opera, Spoiler, Television 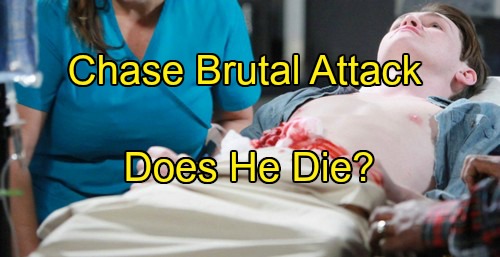 “Days of Our Lives” (DOOL) spoilers tease that Aiden (Daniel Cosgrove) will try to come up with a solution to Chase’s (Jonathon McClendon) legal problem. Chase will insist that he doesn’t want or deserve his freedom. He’s feeling incredibly guilty about what he did to Ciara (Vivian Jovanni) and he has no hope for redemption.

Nevertheless, Aiden will get to work on an argument he can use in court. He’ll vow to help Chase get a chance to become a new man. However, another matter will soon be the top priority. “Days of Our Lives” spoilers indicate that Chase will be brutally attacked in jail.

Based on a DOOL sneak peek pic, it appears Chase will be stabbed in his lower abdomen. It looks like a pretty deep wound. Chase isn’t exactly a tough thug. He’s undoubtedly having trouble holding his own against the other inmates.

The fact that Chase is a sexual predator probably isn’t helping anything. Even criminals have standards. Some of them don’t take kindly to people who rape young girls. Regardless of how and why this happens, “Days” spoilers say Chase will end up in the hospital after a dangerous run-in.

The medical staff will rush to stop the bleeding and assess any potential damage to Chase’s internal organs. Will Chase survive this life-threatening ordeal? We don’t have confirmation on whether or not Jonathon McClendon is still with the show, so it’s anyone’s guess.

Things seem to be somewhat under control in the picture, but you just never know. Killing off Chase would take care of an issue Hope (Kristian Alfonso) and Aiden are facing. Many DOOL viewers have been pointing out how awkward the situation is for these two.

Aiden’s son raped Hope’s daughter and that might be too horrible to get past. How are we expected to buy that they could reunite with this dark cloud hanging over them? If Chase dies, a major barrier would be removed. At least Ciara wouldn’t have to worry about Chase coming after her again.

On the other hand, soaps tend to brush stuff under the rug. It’s possible that Chase could serve as a source of strife for Hope and Ciara in the coming weeks. Ciara might lash out at her mom for giving the father of her rapist another shot.

Whatever the case, we know that Hope will try to console Aiden after the assault. Will Hope provide comfort because Chase is injured or because he’s dead? Stick with “Days of Our Lives” for updates on Chase’s fate.

So “Days” fans, what do you think about the news that Chase will be attacked in jail? Will Chase pull through or meet a grisly end? Which option would lead to a better storyline? Voice your opinion in the comments below and don’t forget to check CDL often for the latest “Days of Our Lives” spoilers, updates and news.