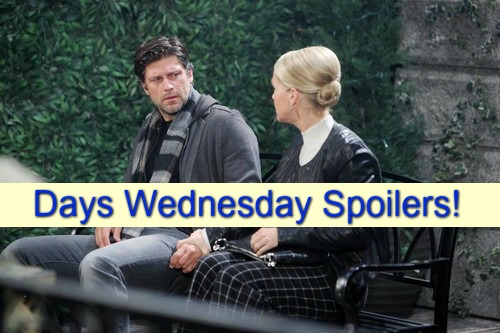 “Days of Our Lives” spoilers for Wednesday, January 27, tease that Eric (Greg Vaughan) will be released from the hospital. Unfortunately, that means it’s time for Eric’s arrest. Roman (Josh Taylor) is clearly worried about his son. Eric killed Daniel (Shawn Christian) and he could end up getting a life sentence.

Nevertheless, Eric has accepted that there will be consequences for his actions. Hope (Kristian Alfonso) suggested that maybe the judge would be lenient since this Eric’s first offense. It doesn’t seem to matter much to Eric either way. Even if the judge goes easy on him, Eric will have to deal with his guilt forever.

Meanwhile, Theresa (Jen Lilley) will notice that Brady (Eric Martsolf) and Nicole (Arianne Zucker) are growing even closer. Brady has Daniel’s heart and that’s helping him establish a real connection to Nicole. DOOL spoilers say Theresa will be envious of the deep bond that Nicole and Brady have developed.

Other “Days of Our Lives” spoilers indicate that Victor (John Aniston) will try to get to the bottom of Deimos (Vincent Irizarry) and his potential tricks. Victor will devise a test to determine how great the threat is. It’s a good thing Victor is looking into all of this. He might be underestimating Deimos and what he’s capable of.

Deimos showed up in Salem with revenge on his mind. “Days” viewers know that could mean bad news for Victor and those close to him. Vengeance has driven many DOOL characters to do some vicious acts. Victor will need to keep an eye on Deimos as well as Philip (John-Paul Lavoiser). Family loyalty certainly isn’t something Victor can count on.

Elsewhere, Belle (Martha Madison) will get fed up with Eve’s (Kassie DePaiva) meddling. Claire (Olivia Rose Keegan) already has a mom and Belle doesn’t think she needs another one. “Days of Our Lives” spoilers say Belle will demand that Eve stop intruding in her daughter’s life. It sounds like Belle has had enough. Stick with the NBC soap to see how Eve will respond.

So “Days” fans, what do you think about Eric being released and arrested? Will Theresa fear that Brady is slipping away? Will Victor eventually get updates on Deimos’ scheme? Will Eve pay attention to Belle’s warning? Voice your opinion in the comments below and don’t forget to check CDL often for the latest “Days of Our Lives” spoilers, updates and news.