Days of Our Lives (DOOL) Spoilers: Marlena and Ari Kidnapped – John and Eduardo Work Frantically to Save Their Lives 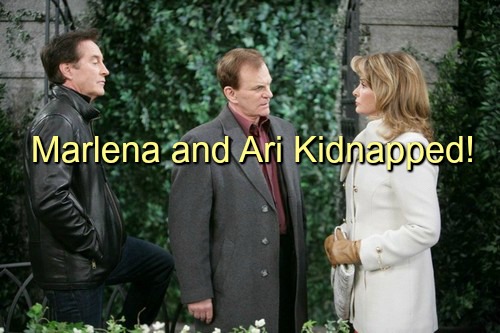 “Days of Our Lives” spoilers tease that HUGE drama is about to unfold on the NBC soap. As March gets underway, John (Drake Hogestyn) will receive jaw-dropping news. DOOL spoilers reveal that Marlena (Deidre Hall) and Arianna (Harper and Sydnee Udell) will be kidnapped!

This stunning revelation is sure to shake John to the core. “Days” fans know that the Eduardo (A Martinez) warned John that the agency wasn’t going to let up. It’s clear that they mean business and they’ll prove it with this hostage situation.

John will undoubtedly feel terrible about putting Marlena and little Ari in harm’s way. He’ll be responsible for the peril they’re facing. Nevertheless, John won’t dwell on his guilt. Now’s not the time to worry about taking the blame. Instead, John has to take action before it’s too late.

It sounds like “Days of Our Lives” viewers are in for some explosive scenes as John works to free his loved ones. This storyline should involve many more DOOL characters as well. Since Ari will be missing, Gabi (Camila Banus) will be filled with fear. JJ (Casey Moss) will try to support Gabi during this horrific crisis.

In addition, this should give Eduardo a chance to get closer to Rafe (Galen Gering). If Eduardo steps up to save his granddaughter, Rafe might be willing to forgive his father for bailing years ago. Of course, that’s assuming Rafe will be able to get over the fact that Eduardo was an assassin.

This whole ordeal could set up the arrival of Gabi’s mother down the road. Dario (Jordi Vilasuso) will get thrown in the mix, too. After this close call plays out, Gabi is going to want her family members nearby.

Christopher Sean (Paul) also tweeted that he had exciting material coming up. Since Paul is John’s son and he’s worked closely with Gabi, he may want to help out. They’re going to need all hands on deck to get through this.

However Days of Our Lives spoilers indicate John and Eduardo will do most of the dirty work. Their training will aid them as they take on these ruthless abductors. Let’s hope they’re up to the task. Marlena and Ari’s lives depend on it! Stick with “Days of Our Lives” for updates on the mission to bring them home.

So “Days” fans, what do you think about the news that Marlena and Ari will be kidnapped? Will John and Eduardo track them down? Will John destroy the organization once and for all? Voice your opinion in the comments below and don’t forget to check CDL often for the latest “Days of Our Lives” spoilers, updates and news.