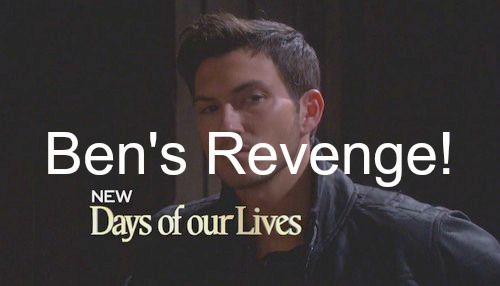 “Days of Our Lives” (DOOL) spoilers for the episodes during the week of February 29 – March 4 tease that Chad (Billy Flynn) and Abigail (Kate Mansi) will gear up for their nuptials. They’ll set a date, settle on a location and share the news with Jennifer (Melissa Reeves). DOOL’s weekly preview video shows Abby stating that their wedding will be held next Friday at the DiMera mansion.

Jennifer will seem a little concerned by the venue, but she’ll probably try to grin and bear it. After Jen hears about all of this, she could end up reaching for her pill stash. Nevertheless, everyone will have to just accept that this is how it’s going to be. Chad and Abigail are anxious to say their vows in front of their closest loved ones. They adore each other and they’re yearning for a bright future together.

Unfortunately, a dark cloud could put a damper on their big day. “Days of Our Lives” spoilers indicate that JJ (Casey Moss) will tell Chad about Ben’s (Robert Scott Wilson) escape from the psychiatric hospital as CDL Days spoilers warned you already. This certainly isn’t the kind of thing Chad wanted to hear right before he started a new life with Abigail.

Based on his previous experiences, Chad doesn’t feel like the Salem PD will get the job done. However, JJ will want to do his part to take Ben into custody. Abigail and Thomas could both be in extreme danger. “Days” spoilers say Chad and JJ will team up to locate Ben before it’s too late.

In the meantime, Abby will rush to finish all the wedding arrangements. It appears the DiMera living room will finally make its triumphant return. Many DOOL viewers have missed this set. It should be nice to break out of the cramped DiMera study for a while.

The promo also shows Abigail looking confused by an ominous phone call. Perhaps crazy Ben will try to get in touch with Abby as he prepares to make his comeback. Let’s hope that Chad and Abigail can say “I do” before Ben blows back into town.

Stick with “Days of Our Lives” spoilers for updates on the peril that awaits.

So Days spoilers fans, what do you think about Chad and Abigail’s upcoming wedding? Are you hopeful that they’ll tie the knot before Ben intervenes? Are you ready to see Ben stir up trouble once again? Voice your opinion in the comments below and don’t forget to check CDL often for the latest “Days of Our Lives” spoilers, updates and news.