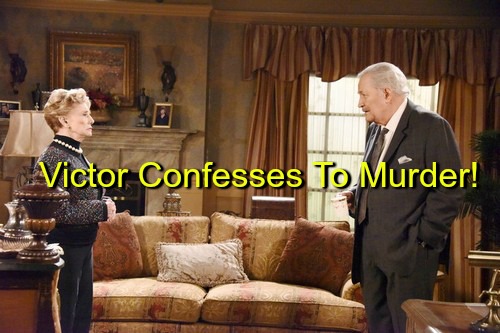 “Days of Our Lives” spoilers tease that Hope (Kristian Alfonso) will decide it’s time to return to the police force. Now that Hope has given Roman (Josh Taylor) a full confession, he’s willing to overlook her crimes. That goes for Rafe (Galen Gering), too. Since the pressure’s off, Hope might as well become a cop again. Maybe it will help Hope regain some sense of normalcy.

Of course, there could be an additional reason for Hope to rejoin the force. DOOL viewers know that Hope received an anonymous phone call that let her know she killed the wrong man. Victor (John Aniston) also told Hope that he suspected Deimos (Vincent Irizarry) had a connection to Dr. Malcolm (Adam Leadbeater).

Hope has caused enough trouble, but she may not be able to resist doing a little investigating. It’s possible that we could see Hope’s vengeful side pop back up. “Days” spoilers say Hope will feel guilty about gunning down Stefano when he wasn’t at fault for Bo’s (Peter Reckell) kidnapping. However, Hope obviously still wants the person responsible to pay the price.

Fortunately, there’s a good chance that Hope has learned her lesson when it comes to vigilante justice. Hope will likely go through the proper channels this time around. Victor, on the other hand, won’t have a problem with targeting Deimos on the down low. He hates his brother’s guts and he’ll be looking for any way he can to bring him down.

Victor and Deimos have a longstanding feud, but there’s been some discrepancy over what really happened between them. “Days of Our Lives” spoilers reveal that Victor will open up to Caroline (Peggy McCay) about the events that unfolded so many years ago. Caroline is about to get shocking news about their tumultuous past.

DOOL buzz suggests that Victor actually killed Helena and allowed Deimos to go to prison for it. That would certainly explain why Deimos is so focused on getting revenge. Victor probably felt his actions were justified since Deimos slept with his fiancée. The war between these brothers is sure to heat up. Stick with “Days of Our Lives” to see which one will get the last laugh.

So “Days” fans, what do you think about Hope going back to work? Will you be glad to see Hope in cop mode again? What about Victor’s updates for Caroline? Did Victor murder Helena and frame Deimos? Voice your opinion in the comments below and don’t forget to check CDL often for the latest “Days of Our Lives” spoilers, updates and news.