BY Heather Hughes on May 26, 2016 | Comments: one comment
Related : Days of Our Lives, Soap Opera, Spoiler, Television 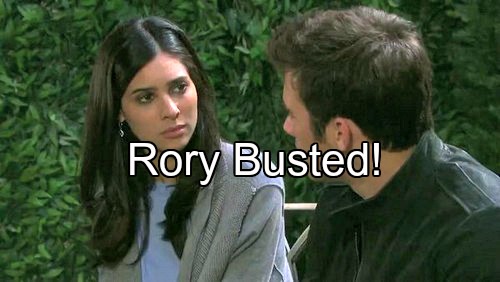 “Days of Our Lives” (DOOL) spoilers tease that there’ll be another Rory (Kevin Riggin) sighting in Salem. This fan favorite typically pops up for comic relief, but he’ll be the reason for some serious tension this time around. JJ (Casey Moss) and Rory used to be best buds, but they now find themselves on opposite sides of the law. Rory is still a drug dealer and JJ is currently a cop.

It sounds like the glaring differences in their career paths will result in major problems. We don’t know for sure what’s in store, but it appears Rory may end up in police custody. DOOL spoilers indicate that Roman (Josh Taylor) and JJ will get into an explosive confrontation over whatever trouble Rory causes.

It’s possible that Rory will simply get caught selling drugs as part of a sting or something along those lines. Of course, we also have to remember that Rory provided Deimos (Vincent Irizarry) with the hardcore pills he put in Maggie’s (Suzanne Rogers) medication bottle. Deimos covered his tracks for his own sake, but he could care less about any consequences for Rory.

Regardless, Rory will be in hot water and JJ will try to get him out of it. “Days of Our Lives” spoilers reveal that JJ will step up for his friend in the midst of all this. Roman, on the other hand, will probably have no use for this druggie. He may want to throw the book at Rory in spite of JJ’s friendship with him.

It seems Roman likes to pick and choose what he lets slide. He’s covered for many of his loved ones lately. Roman looked the other way when Hope (Kristian Alfonso) killed Stefano (Joseph Mascolo) and Rafe (Galen Gering) helped her dispose of the body. In addition, Roman chose to ignore the evidence against Joey (James Lastovic) after he murdered Ava (Tamara Braun).

Now Roman will likely be pushing for a harsh punishment for JJ’s pal. It’s a bit hypocritical, but maybe Roman is trying to preserve what’s left of the Salem PD’s dignity. As for JJ, the ordeal with Rory could clue Eduardo (A Martinez) in on this cop’s shady past. “Days” spoilers say Eduardo will suddenly have a huge issue with JJ dating Gabi (Camila Banus).

Gabi will undoubtedly set Eduardo straight. He’s only been back in his daughter’s life for a few months. Eduardo has no right to tell Gabi who she can or can’t date. Besides, DOOL viewers know that Gabi was released from prison not too long ago. Gabi was convicted of murder! Her past is even shadier than JJ’s.

Stick with “Days of Our Lives” for updates on the continued Hernandez family conflict.

So “Days” fans, what do you think about the news that Roman and JJ will spar over Rory? Will Rory face charges for a drug-related crime? What about Eduardo’s disapproval of JJ? Will Gabi insist that her love life is none of Eduardo’s business?