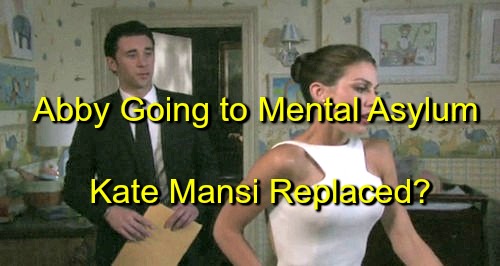 “Days of Our Lives” (DOOL) spoilers reveal that Chad (Billy Flynn) and Abigail’s (Kate Mansi) wedding will soon get underway in upcoming episodes this week. NBC recently released a sneak peek of the happy couple’s big day. DOOL’s preview video shows Abigail in an elegant wedding dress. Abby will chat with Thomas in his nursery until Chad walks in.

Days of Our Lives spoilers let on that naturally, Abigail will be a bit miffed. This makes not once, but twice that Chad has seen his bride in her gown before their actual nuptials. Chad will assure Abigail that she looks beautiful and she doesn’t need to worry about a silly superstition like that.

As usual, Chad will insist that they’re going to spend the rest of their lives together and nothing can come between them.

Every time Chad declares that their future is secure, it’s just another anvil signaling the doom and gloom to come. Kate Mansi’s last air date should be around late May or early June. However, Billy Flynn isn’t going anywhere. That means something will undoubtedly tear Chad and Abigail apart. In fact, we could be seeing the signs already.

“Days of Our Lives” viewers know that Ben (Robert Scott Wilson) is currently on the loose. Abigail is terrified that Ben will return to Salem to wreak havoc. She thought she heard Ben lurking in the mansion, but Chad assured her no one was there.

He said that’s why he didn’t even want to tell Abigail about Ben’s escape. Chad knew Abby would drive herself crazy over this.

Days spoilers as if that statement could foreshadow a mental breakdown for Abigail? We know that Abby is going to let out a huge scream at the wedding on Friday’s episode. Perhaps Abigail hallucinates that Ben is peering in the window.

Then again, maybe Ben’s really there and no one else is able to catch a glimpse of him. Either way, Abigail is probably going to look like she’s going out of her mind.

On next week’s episodes, Chad and JJ (Casey Moss) will decide to fib a little. It sounds like they might lie and tell Abigail that Ben has been captured. Chad is starting to realize that Abigail could crack under the pressure. Once Ben finally appears in the flesh, Abby could totally lose it.

Is Abigail headed to a mental institution at the end of this storyline? It would allow Abby to be out of the picture for a few months while DOOL works on a potential recast. Let’s face it: “Chabby” has practically reached supercouple status. “Days” won’t want to lose half of this extremely popular pairing they don’t have to.

Although Mansi will be ridiculously hard to replace, there’s a good chance the show will at least try. In the meantime, heartbroken Chad will have to carry on without Abigail by his side. Stick with “Days of Our Lives” spoilers for updates on the darkness ahead.

So “Days” fans, what do you think about the news that Chad will see Abigail in her dress before the wedding? Is this an omen of bad things to come? Will Ben’s return cause Abby to completely unravel? Voice your opinion in the comments below and don’t forget to check CDL often for the latest “Days of Our Lives” spoilers, updates and news.