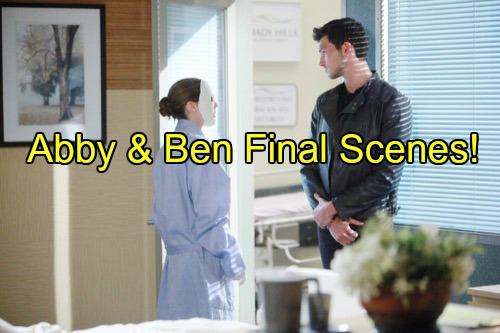 Days of Our Lives (DOOL) spoilers tease that Kate Mansi’s final scenes as Abigail will air this week on the NBC soap. Of course, we still have plenty of drama on the way. Chad (Billy Flynn) just learned that Abigail is the one behind the fire at Shady Hills.

He’ll want to speak with Abigail in hopes of understanding how and why this happened.

DOOL spoilers indicate that Abigail won’t even recall lighting the blaze. She’ll just know that she wants to go home right this minute. Jennifer (Melissa Reeves) and Chad will try to soothe Abigail’s nerves as she worries about Ben (Robert Scott Wilson) lurking in the facility.

JJ (Casey Moss) will also reach out to his sister in her time of need. He’ll try to help Abby understand that it might be time to go somewhere a little safer. Abigail probably needs to be at a mental institution with more security.

However, Chad doesn’t seem to think Abigail is receiving any type of assistance. She’s getting worse, not better. Abby will agree that she just wants to get back to her life with Chad and Thomas. Days spoilers say Chad will request Abigail’s release, but Dr. Robinson (Anne-Marie Johnson) will quickly shut down that idea.

Abigail is obviously a danger to herself and others at this point. She could inadvertently harm Chad or Thomas if she’s living at the mansion. Still, part of Chad just wants to pretend that things could be different. He longs for the days when Abigail only fought for their love.

Now Abby is fighting for her sanity. 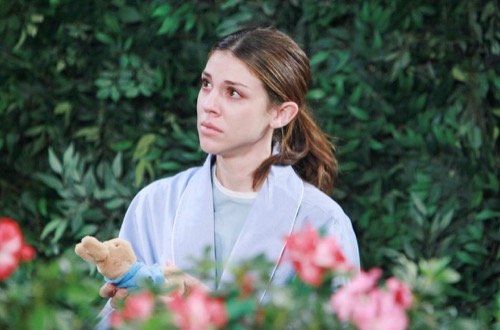 Days of Our Lives spoilers state that Chad will think about helping Abigail make a break for it. Meanwhile, Abigail will share one more showdown with a hallucination of Ben. He’ll tell her that she set the fire herself and they’re going to place her in psychiatric care forever.

Abigail will make the choice to confront her fears. She’ll let Ben know that she won’t be tormented by him anymore. In an interview with Soap Opera Digest, Kate Mansi revealed that she wanted Abigail to go out on a triumphant note.

Marci Miller will take over the role on Days this fall, but this is about completing the arc Mansi started.

Abby currently has a mask covering her face due to traces of an accelerant, but Ben will help her remove it. It’s like a symbolic way of letting Abigail shed all of the darkness and anxiety. Afterwards, Abigail will create a diversion to lure Dr. Robinson away from her office.

She’ll escape out the window and vanish without a trace.

Fortunately, that won’t be Kate Mansi’s last scene. She’ll leave us with a happier memory of her time on Days of Our Lives. They’ll show a sweet daydream of the life Abigail wants with her husband and son. Abigail will hug Chad and Thomas as she enjoys a long-awaited moment of peace.

That’s Abigail’s fantasy, but what’s her reality? There’s a good chance an abduction is about to take place. We’ll give you updates as more news comes to light. Y

ou can check out Kate Mansi and Robert Scott Wilson in their final DOOL performances on Friday, June 24. Stay tuned and don’t forget to check CDL often for the latest Days of Our Lives spoilers, updates and news.