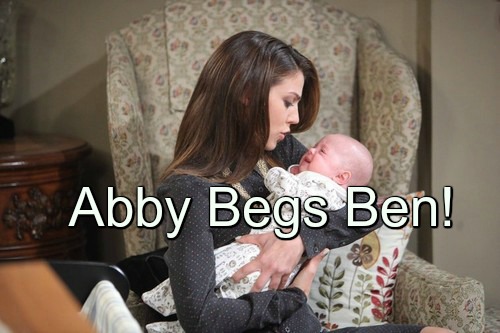 “Days of Our Lives” spoilers reveal that Abigail (Kate Mansi) will panic on an episode this week when she discovers Ben (Robert Scott Wilson) could be lurking near her home. After Chad (Billy Flynn) hears about a possible sighting on the edge of the property, he’ll immediately check it out.

DOOL spoilers say JJ (Casey Moss) will help Chad search for Ben as they try to put the turmoil to rest.

Unfortunately, that will leave Abigail alone with her thoughts. “Days” viewers know that Abby hasn’t been doing well since she heard about Ben’s escape. The fear will build as Abigail fights to protect Thomas.

Suddenly, Abby will come face to face with the man who kidnapped her child and tried to kill her. Abigail will beg Ben to let her live and leave the baby alone.

Days spoilers warn that Ben will stare down Abigail in his usual villainous way. This guy is a monster and Abigail has every right to be terrified. However, the chilling situation will soon take a strange turn.

“Days of Our Lives” spoilers indicate that Abigail will realize that the whole encounter was in her head. She’ll figure out that she simply imagined that Ben was actually in the room with her.

The eerie twist will throw Abigail for a loop. DOOL spoilers tease that Abby will turn to Chad to help her through this. Chad will assure Abigail that everything will be fine. He’ll try to take Abigail’s mind off her troubles with romance and family time.

Chad is growing concerned about his love, but he feels like their problems will be solved if he can just get Ben locked up.

Chad thinks catching Ben is the answer, but that may not be the case. Abigail could continue to imagine Ben long after he’s killed or placed back in a psychiatric hospital. It’s clear that Abigail is becoming more and more unstable. At some point, Abby might be beyond Chad’s help.

All of this could be leading up to Kate Mansi’s departure. It isn’t too far away now. Mansi’s last scenes are scheduled to air sometime around late May or early June. If Abigail heads somewhere for treatment, Chad will be devastated.

Luckily, a recast is in the works. That means this isn’t really goodbye. Stick with “Days of Our Lives” to watch Abigail unravel.

So “Days” fans, what do you think about the news that Abigail will hallucinate a lengthy encounter with Ben? Is this confirmation that Abby is officially going insane? Will the visions force Abigail to make some updates to her life?