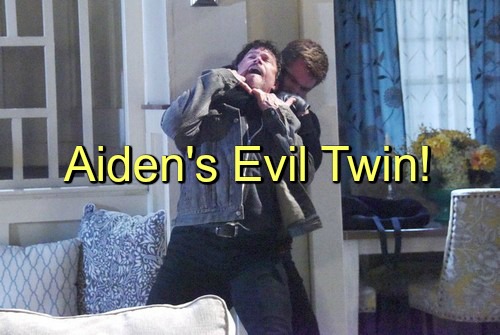 “Days of Our Lives” spoilers reveal that a familiar face is headed back to Salem soon. You’ve probably heard by now that Daniel Cosgrove (Aiden) is returning to DOOL, but there’s some new information on the length of his stint. This news could definitely give us clues about Aiden’s upcoming storyline.

According to Jason47’s “Days” Facebook website, Daniel Cosgrove will return this spring and his visit won’t be brief. When Cosgrove reprises his role as Aiden, he’ll “be sticking around for much more than just a few episodes.” Hmm…this is quite intriguing since Aiden is currently dead.

Days of Our Lives spoilers imply that since we now know Cosgrove will be at DOOL for a while, it seems likely that the show will choose to go for an evil lookalike plot. We watched Bo (Peter Reckell) kill Aiden right before our eyes, but what if that wasn’t the real Aiden? “Days of Our Lives” could easily take the doppelganger route.

Around the time of a major writing change, Aiden suddenly became a villain. We learned he’d been hired by Stefano (Joseph Mascolo) and Andre (Thaao Penghlis) to make Hope (Kristian Alfonso) fall in love with him.

We also discovered that Aiden had a gambling problem and a massive amount of debt. None of that was in character for Aiden and we may get a good explanation.

Let’s say Stefano and Andre found an Aiden lookalike who needed money. It’s even possible they made the guy get plastic surgery. Who knows? Regardless, Andre and Stefano might’ve plopped him in Aiden’s life to do their dirty work.

Since the impostor was in debt up to his eyeballs, he wouldn’t have been able to pass up the paycheck. This phony Aiden may have felt he had no choice but to go after Hope like the DiMeras ordered. Meanwhile, the real Aiden might be stuck in some dungeon or on an island somewhere.

Aiden could be rescued and make his way back to Hope. The writers would have to come up with a time frame of when the switch occurred and gloss over a couple of minor details, but this would be an excellent storyline. There’s so much potential for drama here. Stick with “Days of Our Lives” for updates on the exciting scenes ahead.

So “Days” fans, what do you think about the news that Daniel Cosgrove’s stay will be a lengthy one? Did Bo kill an Aiden lookalike? Has the actual Aiden been in captivity? Voice your opinion in the comments below and don’t forget to check CDL often for the latest “Days of Our Lives” spoilers, updates and news.