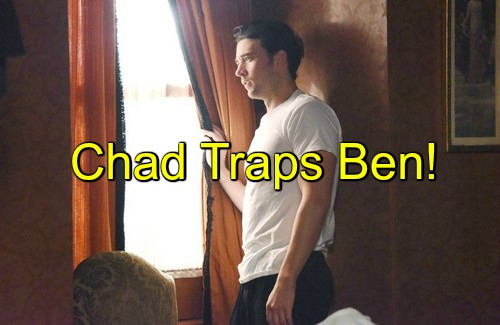 “Days of Our Lives” (DOOL) spoilers reveal that Chad (Billy Flynn) and Abigail (Kate Mansi) will head to Chicago for a blissful honeymoon. Since Abigail has been so worried about Ben (Robert Scott Wilson), she won’t want to leave Thomas behind with the nanny.

Chad certainly won’t mind taking their little guy along. They’ll all enjoy some family time at the hotel once they arrive.

DOOL spoilers indicate that Chad and Abigail will be deliriously happy. Being husband and wife is a dream come true. Unfortunately, this honeymoon is about to turn into a total nightmare.

“Days” viewers know that Abigail has been seeing and hearing Ben everywhere she turns. Her imagination is running wild now that Ben is on the loose.

Abigail will be stunned when she sees Ben in bed beside her. Ben will likely just be in Abigail’s mind, but he’ll seem very realistic. Chad will comfort Abigail in any way he can, but it’s clear that Ben’s escape has truly affected her.

Abby is going down a dangerous path and Chad will decide to take action on next week’s episodes. “Days of Our Lives” spoilers tease that Chad will form a plan to take care of this risky situation. Abigail obviously can’t handle the threat, so it’s imperative for Chad to get Ben locked up ASAP.

Chad will set a trap in hopes of luring Ben to a specific location. He’ll want to draw Ben out of hiding and secure his capture.

Chad would do anything to protect his love, but Abigail is in a very fragile state. She’s panicking over these visions of Ben. What could happen if Abby spots the real deal? It appears DOOL may be setting up a mental breakdown for Abigail.

Days of Our Lives spoilers know that Abigail will be devastated if the trap doesn’t work. She’s slowly slipping away and there may not be anything Chad can do about it. We should also consider how all of this might end.

They’ve already brought Ben back once, so there may not be a need to save this character for anything else. Could that mean Ben will be killed off? It’s a possibility.

If a showdown occurs, Abigail might even be the one to take Ben out. That could be what really sends her over the edge. Abigail may need psychiatric care if she’s forced to kill her crazy ex.

Then again, it’s possible that Chad will step up and do the job himself. It would be fitting since Chad usually loses his fights with Ben. Maybe Chad could win the final battle.

Still, Abigail might be so disturbed by the whole ordeal that she needs to seek treatment. Whatever the case, we’ll all be waiting to see how this exciting storyline unfolds. Stick with “Days of Our Lives” for updates on the madness to come.

So “Days” fans, what do you think about the news that Chad will try to trap Ben? Will this plan hit a snag? Will Ben be killed off when his second reign of terror is over? Voice your opinion in the comments below and don’t forget to check CDL often for the latest “Days of Our Lives” spoilers, updates and news.