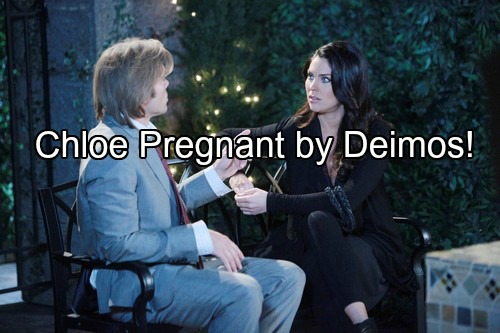 Days of Our Lives (DOOL) spoilers tease that Chloe (Nadia Bjorlin) will get some life-changing news. She’ll be shocked when she finds out she’s pregnant with Deimos’ (Vincent Irizarry) baby. Chloe is undoubtedly wishing she’d let Deimos walk out that door in Chicago! Instead, Chloe called Deimos back and they made love on the sofa.

Now there’s a little Kiriakis coming and Chloe won’t know what to do. This obviously isn’t the ideal situation. Chloe was ready to concentrate on her career, but this baby could throw off her plans. Plus, she’s carrying the child of a man who conned her and nearly killed Maggie (Suzanne Rogers).

Chloe barely knows Deimos (aka Robert). He’s certainly not the dad she had in mind for her kid. DOOL viewers have watched Philip (John-Paul Lavoisier) reconnect with Chloe lately. She’ll decide to trust him with this stunning secret.

Days of Our Lives spoilers say Chloe will confess that she’s expecting Deimos’ child. Philip will be floored by the revelation. He’ll probably think it was foolish to rush into sex with someone so shady, but what’s done is done.

Chloe doesn’t need judgment right now. She needs support and that’s exactly what Philip intends on giving her. There’s a chance that Philip will even offer to pose as the “baby daddy” if Chloe wants him to.
However, Chloe already went down a murky paternity road with Parker (Christian Ganiere).

That was a disaster, so maybe Chloe learned her lesson. She might try to face reality. Regardless, it appears Chloe will plan on prolonging the inevitable.

Days of Our Lives buzz suggests that Chloe will try to conceal her pregnancy for the time being. She’ll have a while before she gets a baby bump. As a fun fact, this storyline was added in because of Nadia Bjorlin’s real-life pregnancy. We have to give props to DOOL for including it!

There’s no need to use big purses and higher countertops when you can just do a pregnancy storyline. We might as well get some good baby drama out of it. As Chloe struggles to wrap her head around everything, Deimos will remain oblivious to what’s headed his way. He’ll be focused on his future with Nicole (Arianne Zucker).

Days spoilers reveal that Nicole will be impressed by the steps Deimos has taken to repair his relationship with Victor (John Aniston). Nicole will admit that Deimos seems to have truly changed. She’ll soon feel closer to him than ever before.

A sex session and proposal are looming, but complications will quickly emerge. Of course, Deimos and Nicole’s issues may be small potatoes compared to the bomb that Chloe will eventually drop. Deimos has no idea what’s in store.

Can Deimos and Nicole’s romance survive all of the turmoil? Time will tell, but Days fans will definitely want to stay tuned over the next few months. Some huge twists are coming and they’re sure to blow you away. We’ll give you updates as more details emerge. Stick with DOOL and don’t forget to check CDL often for the latest Days of Our Lives spoilers, updates and news.