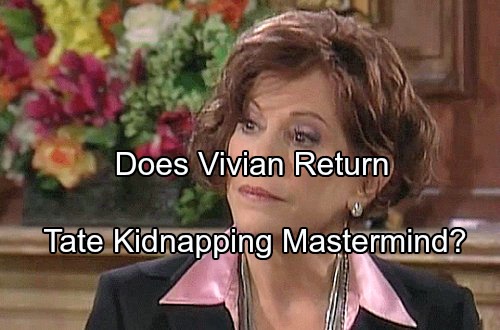 Days of Our Lives (DOOL) spoilers tease that Louise Sorel (Vivian Alamain) will be stopping by Dishin’ Days for a special interview on August 1. This is part of their series called “Spotlight On,” which features DOOL stars of the past and present. Since there’s been some speculation about Vivian’s return, there’s a chance that this interview could involve an announcement.

After all, the timing is a bit suspicious. Tate’s kidnapping storyline is really heating up and Vivian would be the perfect mastermind. Now that the idea is gaining some traction, perhaps Days is allowing Vivian to spoil her potential return.

Even if Vivian isn’t behind Tate’s kidnapping, she could still be making a comeback. We know that two Days of Our Lives villains are set to pop in this summer. Of course, it’s also possible that Sorel agreed to come in and dispel any theories. We just don’t know what Sorel will reveal and that’s what makes this interview so intriguing.

Vivian is a bit of a firecracker. This classic villainess was constantly causing drama, especially for the Kiriakis clan. Vivian had a thing for Victor (John Aniston) and she was always scheming to win him over. She’s truly capable of anything. 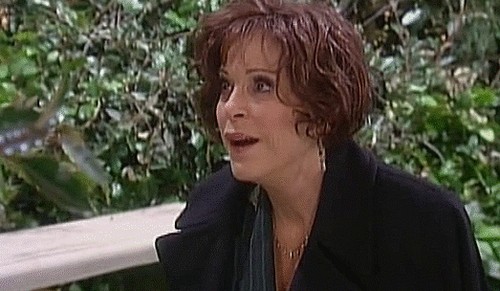 Vivian came up with a plan to trap Maggie in a sarcophagus, but Brady (Eric Martsolf) found out and trapped Vivian instead. After Vivian’s minion freed her, she resumed her quest to get rid of Maggie. She buried Maggie alive, but Victor saved the day.

Next, Vivian took control of Titan Industries. Brady got pretty fed up with Vivian’s shenanigans. He had a pilot strand Vivian and her henchman on an island. Once several weeks had gone by, Maggie convinced Brady and Victor to pick them up. In exchange for the opportunity to rejoin civilization, Vivian granted Victor a divorce and her Titan takeover fizzled.

From then on, Vivian managed to steer clear of the Kiriakis family for the most part. However, the aforementioned details could easily point to a long-held grudge. All of those ordeals give Vivian a motive to come after Brady by taking his child, which would undoubtedly hurt Victor as well. She could kill two birds with one stone.

Vivian may also have access to Titan connections. John (Drake Hogestyn) has found a link between Titan Industries and a disbanded company that has ties to Victor. Vivian could be using the dummy corporation. She probably still has info and contacts from when she tried to get her hands on Victor’s business.

Bottom line, there’s definitely enough evidence to support the idea that Vivian is responsible for Tate’s abduction. That doesn’t mean it will turn out to be true, but the option is still on the table. Many Days of Our Lives fans would love to see Vivian return to the NBC soap.

Once Louise Sorel’s interview airs, we’ll give you updates on any news she reveals. Regardless, it should be fun to hear about Vivian! Stay tuned to DOOL and don’t forget to check CDL often for the latest Days of Our Lives spoilers, updates and news.