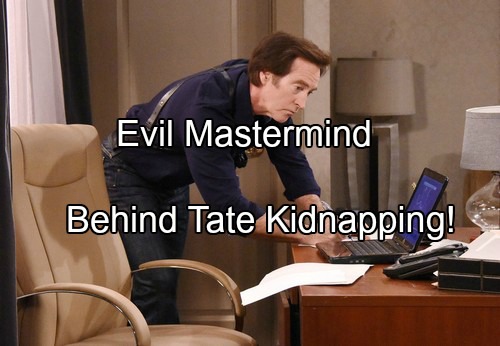 Days of Our Lives (DOOL) spoilers reveal that the team at Black Patch will continue their efforts to find Tate. They’ve been trying to follow a few leads, but nothing seems to pan out. Brady (Eric Martsolf) and Theresa (Jen Lilley) are really no closer to getting their son back than they were on day one.

Nevertheless, the investigation will move forward. Theresa and Brady are trying to remain hopeful. Their marriage could be in trouble if Tate isn’t returned safe and sound. There’s always a possibility that we won’t get a happy ending in this DOOL storyline. That’s something Theresa and Brady don’t even want to think about.

Regardless, Days of Our Lives spoilers indicate that we’ll see some crucial developments in the case. John (Drake Hogestyn) will find a new clue and it looks like it may lead to Deimos (Vincent Irizarry). The day after John gets the lead, he’ll approach Deimos with Brady by his side. They’ll grill the dark Kiriakis about what he knows.

However, Justin (Wally Kurth) already mentioned Tate’s kidnapping to Deimos and he seemed genuinely surprised. Deimos insisted that taking a child from his mother was appalling. When Deimos was staying with Chloe (Nadia Bjorlin) in Chicago, he spent some time bonding with Parker (Christian Ganiere). He apparently has a soft spot for kids.

Besides, Deimos is going to great lengths to help Maggie (Suzanne Rogers) walk again. He’s all about making amends. Winning Nicole (Arianne Zucker) over is Deimos’ top priority, so why would he jeopardize it by snatching Tate? It’s doubtful that Deimos is behind the kidnapping.

Of course, Victor (John Aniston) has drawn plenty of suspicion. He claims he’s innocent, but can’t know for sure. It’s possible that Victor wanted to teach Brady a lesson, get Theresa out of his life and maybe even set up Deimos.

That theory is starting to look less likely though. It appears John may drop Deimos as a suspect pretty soon. Days of Our Lives spoilers suggest that Deimos and Nicole will grow closer next week. If there was anything solid to go on, Deimos would be locked up and unavailable for romance.

Kristen (Eileen Davidson) would make sense as the mastermind of this operation. Days viewers know that Kristen’s body was never recovered, which means she undoubtedly survived her fall in Italy. Kristen thinks of Tate (aka Christopher) as her own son.

The only problem is that Eileen Davidson dismissed the idea of making a summer return in interviews and on Twitter. Unless Davidson is lying, we may have to keep searching for our culprit. Luckily, there’s another good option left to consider.

We’ve been hearing Vivian Alamain’s (Louise Sorel) name tossed around as a potential return. Her list of crimes is a mile long, but all you really need to know is that she’s gone after Victor and his family oodles of times. She would be ruthless and savvy enough to pull this off.

Brady has certainly done some things to incite Vivian’s wrath over the years. He once trapped Vivian in a sarcophagus. Later, Brady left Vivian stranded on a desert island for a several weeks. In other words, there’s probably still some bad blood there.

It’s worth mentioning that Louise Sorel will be doing a special interview with Dishin’ Days on Monday, August 1. Could Sorel be stopping by to tease any big news? We’ll have to wait and see, but it should be interesting to hear her updates. Stay tuned to DOOL and don’t forget to check CDL often for the latest Days of Our Lives spoilers, updates and news.