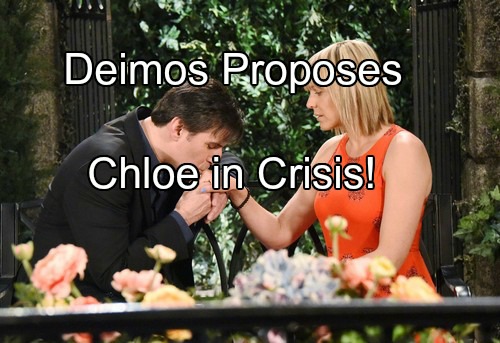 Days of Our Lives (DOOL) spoilers for the week of August 1-5 tease that stunning moments are in store. The weekly preview video provides a sneak peek at all of the shocks and scandals happening in Salem. Days will deliver some exciting action in the next few episodes.

For starters, a pregnancy bomb will drop. Days of Our Lives spoilers indicate that Chloe (Nadia Bjorlin) will begin to feel ill. She’ll have a hunch about what’s going on and a pregnancy test will confirm her suspicions.

Shortly after she finds out, Chloe will meet with Philip (John-Paul Lavoisier) at the pub. He’ll push Chloe to open up about whatever’s bothering her. Chloe will talk about falling for Deimos (Vincent Irizarry) when he was staying in her home. She’ll hint that she couldn’t resist temptation.

Once Chloe admits that she’s pregnant, Philip will try to wrap his head around it. The promo shows Philip saying, “Are you telling me the father…” Chloe will nervously verify that this baby belongs to Deimos. Philip will be taken aback by Chloe’s confession, but he’ll offer his support.

Elsewhere, DOOL spoilers say Nicole (Arianne Zucker) will like the shifts she’s seeing in Deimos’ attitude. He’s putting his vengeful days behind him and truly making an effort with Victor (John Aniston). Since Nicole is close to Maggie (Suzanne Rogers), she’ll really appreciate that Deimos found a surgeon to help her walk again.

Of course, we can’t forget that Deimos is the one who caused Maggie’s paralysis in the first place. Nicole isn’t forgetting that either. She’ll approve of the changes Deimos is making, but she still won’t be sure she trusts him.

Still, there’s something about Deimos that draws Nicole in. They’ll have a failed attempt at sex, but things will run smoothly the second time around. Deimos will be on cloud nine after making love with Nicole. He’ll be so thrilled that he blurts out a proposal.

Days of Our Lives spoilers reveal that Nicole won’t know how to react. She’ll feel like Deimos has been trying to rush this from the moment he met her. Deimos will probably admit that’s true. He initially fell for Nicole because she looked like his dead lover, Helena (Arianne Zucker).

However, Deimos now values Nicole for who she is. This isn’t about recapturing what was lost. It’s about developing a meaningful relationship with someone Deimos cares about. Deimos will plead his case and talk about the great life he wants to share with Nicole.

Nicole might consider Deimos’ offer of marriage. Unfortunately, the evening will take a wrong turn when Deimos mentions the idea of having kids. Longtime Days viewers know that Nicole had a miscarriage as well as a stillborn baby. She was originally told she couldn’t have children, so the fact that she was able to conceive was a surprise.

Nicole will get upset about not being able to give Deimos a child. She’ll quickly rush off without providing an explanation. Later, Nicole will tell Chloe about Deimos’ sudden proposal. Deimos should have a mess on his hands down the road.

We’ll give you updates on DOOL’s hottest storylines. A huge week is coming up! Stay tuned and don’t forget to check CDL often for the latest Days of Our Lives spoilers, updates and news.