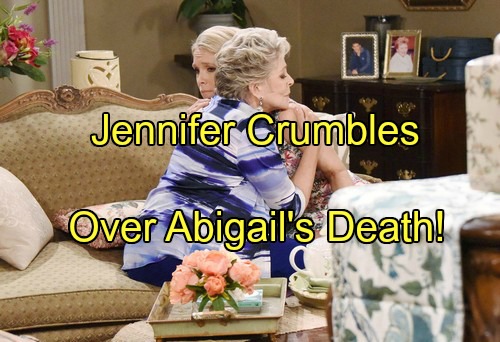 Days of Our Lives (DOOL) spoilers for the week of August 1 tease that Jennifer (Melissa Reeves) will continue to fight for what she believes is right on next week’s episodes. Jen feels like Chad (Billy Flynn) is just too overwhelmed to care for Thomas at the moment. She’s pushing for custody in hopes of getting Thomas in a more stable environment.

Of course, Chad is outraged that Jennifer is trying to take his child away from him. He’s definitely struggling to cope with Abigail’s (Kate Mansi) disappearance, but he still believes he’s perfectly capable of giving Thomas everything he needs. In fact, having Thomas around is probably the only thing keeping Chad together.

Days spoilers for the week of August 1 state that Jennifer will concentrate on Thomas’ well-being. She knows Chad is hurting, but her grandson has to be her priority. Their custody battle will become quite hostile next week. Doug (Bill Hayes) and Julie (Susan Seaforth Hayes) have been supporting Jennifer, but she’ll soon seek even more help.

Bottom line, Jennifer isn’t going to give up. In some ways, Jen may be using this custody issue to put her addiction behind her. She managed to get off painkillers, but it hasn’t been an easy task. Maybe Jennifer is trying to focus on something that she thinks will truly be helpful.

Unfortunately, all of this will be devastating for Chad. To make matters worse, Days of Our Lives spoilers hint that reality could set in for Jennifer, Chad and JJ (Casey Moss). They may finally start to accept that Abigail could be dead.

Andre (Thaao Penghlis) suggested that Abigail was on board a plane that crashed in the Gulf of Mexico. Chad was hesitant to believe it, but he might change his view. Days spoilers indicate that the custody battle will reach a boiling point as Abigail’s loved ones grieve.

Jennifer will most likely feel the urge to reach for her pill bottle, but she’ll try to stay strong. Luckily, Jen will get a blast from the past to carry her through this. Days of Our Lives spoilers reveal that Jennifer will have a fantasy of Jack (Matthew Ashford). She’ll imagine that he’s consoling her in her time of need.

Jennifer will sob over the constant drama in her life. Since Jen was busy dealing with her drug addiction during Abigail’s mental decline, she may feel responsible for her daughter’s presumed death. Jack will hold Jennifer close and let her know that everything is going to be OK. He’ll offer Jen some advice that she’ll cling to in the coming months.

It sounds like Abigail’s friends and family members will try to make peace with her passing. That should make it even more shocking when Abigail shows up alive this fall. Marci Miller is currently taping as Abby and her first DOOL airdate should be in November.

What does the future hold for Chad and Abigail as a couple? Will it be like old times or will they have trouble reconnecting? We’ll give you updates as more news comes in. Stay tuned to DOOL and don’t forget to check CDL often for the latest Days of Our Lives spoilers, updates and news.