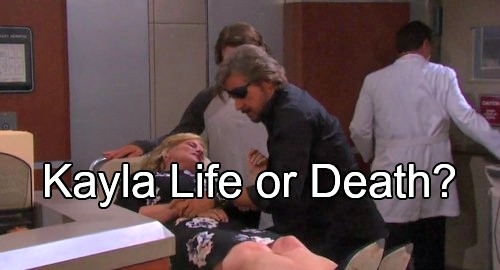 Days of Our Lives (DOOL) spoilers tease that Kayla (Mary Beth Evans) will hope to keep her son on the right track. Days fans know that Joey (James Lastovic) has had a rough time over the last few months. Ava (Tamara Braun) drove Joey to his breaking point and he truly snapped. After committing murder, Joey will never be the same. He can only hope to live with his regret and move forward.

Fortunately, Kayla managed to get Joey into a therapy session. She’ll sense that Joey is doing better since he talked through some of his issues. Days of Our Lives spoilers say Kayla will urge Joey to keep it up. Additional therapy will undoubtedly be a good thing. Kayla will admit that she’s going to therapy with Steve (Stephen Nichols), too.

It seems Kayla is starting to accept that she’s meant to be with Steve. She’s been trying to fight it, but we all knew she’d open her heart eventually. Of course, these two have a long way to go. Kayla is still worried that being with Steve will come with risks. It’s going to be a while before Kayla can let her guard down.

Steve is making an effort to show “Sweetness” how much she means to him. He traded in his exciting job in the private investigating biz for a more mundane gig as a bartender. Steve doesn’t mind if it means Kayla will begin to trust him again.

Some couples counseling could be quite beneficial as they try to sort out their feelings and differences. However, it could also highlight old wounds that haven’t healed. Kayla may continue to drag her feet on a full reunion with Steve.

It often takes a crisis to bring struggling DOOL characters together. Days spoilers reveal that a big one is headed in Kayla and Steve’s direction. Kayla’s subdural hematoma will likely get worse. She’s been putting off the surgery, but a shocking medical scare will force her to go under the knife.

Both Steve and Joey may feel guilty for putting Kayla in this situation. Steve brought Ava back into Kayla’s orbit when he returned to town. Joey made Ava’s twisted plans easier by teaming up with her. Ava got the upper hand and she delivered the blow to Kayla’s head in the midst of the chaos.

Nevertheless, danger is lurking around every corner in Salem. Kayla could’ve died as a result of the virus outbreak. Her life is even at stake when she takes a stroll through the park! No Days of Our Lives character is ever really safe.

Perhaps Kayla will finally determine that some things are beyond her control. She can’t live in fear of what might happen because disaster is always going to strike. After Kayla’s surgery, she may decide to forget about the risks and just enjoy every moment she’s been given with her family.

Will Kayla’s medical emergency help her reunite with her true love? Will Steve get all he’s ever wanted? Time will tell, but “Stayla” fans are hoping that could be the silver lining of this painful experience. We’ll give you updates as other news emerges. Stay tuned to DOOL and don’t forget to check CDL often for the latest Days of Our Lives spoilers, updates and news.