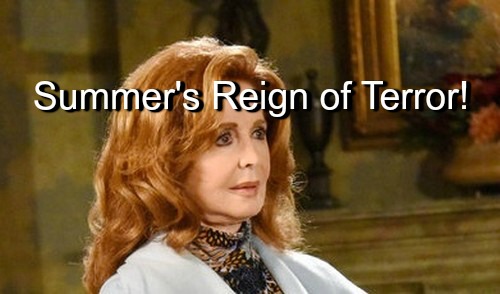 “Days of Our Lives” spoilers reveal that Dario (Jordi Vilasuso) will soon make his way back to Salem and face major trouble in coming episodes. Dario had a successful career in Argentina, but he opted to leave it for a laid-back life in sunny California. Now Dario is thinking it might be time for another change.

Dario’s chat with Nicole (Arianna Zucker) made him realize that he needs to reconnect with his family and that’s exactly what he intends to do.

Before Dario attempts to strengthen his bond with Rafe (Galen Gering) and Gabi (Camila Banus), he’ll make a brief stop to see an old friend. DOOL spoilers indicate that Dario will show up in this week’s episodes at Summer’s (Marie Wilson) hotel room to see how she’s doing. Of course, Dario may have some fears about Summer’s new situation.

“Days of Our Lives” spoilers fans are aware that Summer is unstable and she’s apparently a bit of a kleptomaniac as well. She’s already gathered a basket of trinkets from most of the people she’s met. Dario seems nervous about how Summer will behave that she’s getting to know Brady (Eric Martsolf), Theresa (Jen Lilley) and Maggie (Suzanne Rogers).

It’s clear that Summer has a few skeletons in her closet and Dario may suspect they’ll come back to haunt her.

Once Maggie finds out that Summer is supposedly her daughter, Days of Our Lives spoilers tease that she’ll also grow concerned. Bottom line, Maggie can’t trust Summer and “Days” viewers shouldn’t either. Something’s definitely up with little Miss Malibu.

It may take a while for Brady to get a clue, but he’ll eventually see what a big mistake it was to bring Summer into all of their lives.

In the meantime, Dario will have a different crisis to handle. Days spoilers say Dario will discover that Eduardo (A Martinez) left his family because he was an assassin. That’s not exactly comforting news, but at least it will provide Dario with an explanation.

Dario has spent years wondering why his father abandoned him. Knowing Eduardo had a reason might ease the pain.

On top of that stunning revelation, Dario will have to deal with his dad’s upcoming injuries. Eduardo will be shot and rushed into surgery after a dangerous showdown. This brush with death could help the Hernandez brothers warm up to their father. Stick with “Days of Our Lives” to see if Rafe and Dario will forgive Eduardo for his mistakes.

So “Days” fans, what do you think about Dario and Maggie’s suspicions regarding Summer? What about all the shocking updates headed toward Dario? Will Rafe and Dario be able to move past Eduardo’s faults? Voice your opinion in the comments below and don’t forget to check CDL often for the latest “Days of Our Lives” spoilers, updates and news.