‘Days of Our Lives’ Spoilers: New Break in Tate’s Kidnapping Case, Caroline Has a Vision 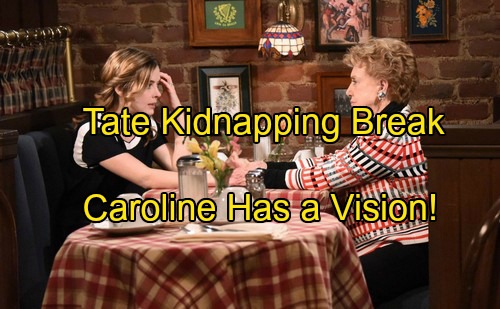 Days of Our Lives (DOOL) spoilers tease that Theresa (Jen Lilley) will confide in Caroline (Peggy McCay). Tate’s kidnapping has really been tough for Theresa to handle. The Black Patch team is frantically searching for the tot, but it feels like they take one step forward and two steps back.

Thanks to the toy they found in Summer’s (Marie Wilson) old hotel room, Brady (Eric Martsolf) and Theresa realized she’d been lying. Summer quickly left town after Theresa confronted her about it. Since that turned out to be Marie Wilson’s last airdate, it seems Summer won’t be providing any answers.

Days of Our Lives spoilers indicate that Theresa will think she hits nothing but dead ends. She’ll open up to Caroline about her failure. Even though Theresa was drugged, she’ll still suggest she should’ve protected her son. Theresa is dealing with a tremendous amount of pain and guilt.

If there’s anyone who can cheer Theresa up, it’s Caroline. She’s the person to see if you need a pep talk in Salem. Caroline is almost as sweet as her pie. Theresa will be grateful that she has Caroline to support her. She’s clinging to anything that can give her comfort.

Caroline will likely tell Theresa that she shouldn’t blame herself. She could also remind Theresa of how she felt when Bo (Peter Reckell) was missing. Everyone but Steve (Stephen Nichols) insisted that Caroline shouldn’t expect Bo to come home. Even when it looked like Bo was dead, Caroline refused to give up hope.

Bo didn’t survive for very long after his triumphant return, but at least he had a little time to say goodbye to his family. He wouldn’t have had those special moments if Caroline and Steve hadn’t been in his corner. Days viewers know that Caroline believes in miracles and she’ll feel confident that Theresa will get one. Will that miracle possibly include Caroline having a vision that provides a clue to Tate’s rescue, Days spoilers say it will.

Meanwhile, DOOL spoilers reveal that John (Drake Hogestyn) and Brady will get a break in the case. A new lead will come in and it could put them on the right track. It appears there may be some connection to Indianapolis that needs to be investigated.

Days of Our Lives spoilers state that John will agree to check it out. This could be good news for Brady and Theresa. What clues will John uncover? Will Brady tag along or choose to hold down the fort in Salem? This mystery is still unraveling, but we’ll get updates on the details sooner or later.

Unfortunately, it looks like we’ll have to wait until the Olympics are over to get real clarity on the situation. However, a sneak peek promo will be coming up soon. It could provide some valuable insight.

Will some Days returns be spoiled? Could we catch a glimpse of Tate’s kidnapper? DOOL fans will want to check out the teaser, which is set to drop at the end of the week. It’ll be a nice gift for viewers as we head into two weeks without our stories. Stay tuned and don’t forget to check CDL often for the latest Days of Our Lives spoilers, updates and news.