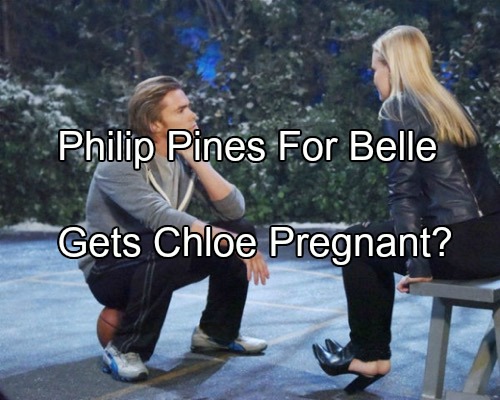 Days of Our Lives (DOOL) spoilers tease that Philip (John-Paul Lavoiser) will attempt to drown his sorrows. Philip has always longed for Belle (Martha Madison), but things just never seemed to work out. When Belle and Shawn (Brandon Beemer) broke up, Philip finally thought he had his chance.

Unfortunately, Belle treated Philip more like a booty call than a soul mate. She cares about Philip, but she’s certainly not in love with him. Philip could tell that Belle still had feelings for Shawn and he urged her to trust her instincts.

Belle followed her heart and now Philip is dealing with a broken one. Days of Our Lives spoilers say Philip will try to numb the pain with alcohol. He just can’t get Belle off his mind. She’s truly the one that got away.

DOOL viewers know that desire and booze don’t mix very well. Philip will make a mistake in his drunken despair. Days spoilers reveal that an inebriated Philip will plant a big kiss on Belle. She’ll undoubtedly be surprised by the smooch, but she won’t deviate from the plan.

Shawn is the man Belle wants to be with. They’ve both realized they belong together. Philip needs to sober up and get over it. Luckily, someone else could lift Philip out of his funk. Days of Our Lives spoilers indicate that Philip will be stunned to when he spots Chloe (Nadia Bjorlin) in Salem.

Right now, Chloe is stuck in the middle of Deimos (Vincent Irizarry) and Nicole’s (Arianne Zucker) drama. She had sex with Deimos, but she fears he’s secretly pining for Nicole. Deimos claims that he only fell for Nicole because she looks like his true love, Helena (Arianne Zucker).

However, it may not be that simple. It appears Nicole developed real feelings for Deimos in the midst of her scheme.

Deimos currently wants a fresh start with Chloe, but he may not feel the same way if he knows Nicole wants him. Chloe might decide to take herself out of this competition. As Chloe struggles with her doubts about Deimos, she’ll find herself drawn to Philip.

These former flames have quite a history. Will Philip hook up with Chloe shortly after her arrival in town? If so, we might have the setup for a classic “who’s the daddy?” Whenever a female sleeps with two men within a short period of time, you can bet that a Days paternity mystery is brewing.

This scenario is perfect since Chloe has gone down this road with Philip before. She didn’t know whether Daniel (Shawn Christian) or Philip was the father when Parker (Christian Ganiere) was conceived. At least Chloe would be keeping it in the family with this baby!

If Deimos and Philip are the options, we’ll know this kid is a Kiriakis.

Regardless, some major storylines are in the works for Chloe. She’s going to be a huge part of Salem moving forward. We’ll give you updates as more DOOL news comes in. Stay tuned and don’t forget to check CDL often for the latest Days of Our Lives spoilers, updates and news.