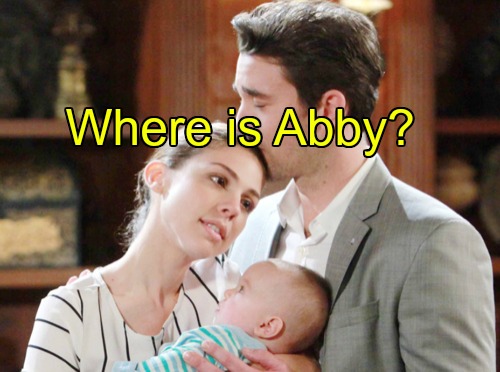 Days of Our Lives (DOOL) spoilers tease that Chad (Billy Flynn) will be shocked when he discovers Abigail (Kate Mansi) has disappeared from the psychiatric facility on this week’s episodes. Honestly, Chad might want to think about a lawsuit. First, Shady Hills let Abigail set herself on fire and now they’ve let her escape.

They could obviously use better security and a more competent staff.

Nevertheless, Chad’s primary focus will be tracking Abigail down. He knows that Abby is scared and confused. DOOL spoilers say Chad will send out some DiMera minions in hopes of finding Abigail before she gets too far. Chad’s men will search everyone, but they probably won’t find any hints about Abigail’s location.

Things will take an interesting turn when a note from Abby surfaces in the living room. Days of Our Lives spoilers reveal that Chad will be devastated by the words of his tormented wife. Perhaps the letter will indicate that Abigail has gone off to find herself.

It might suggest that Abby can’t bear to be locked up in a mental institution, but she doesn’t want to be a danger to her family either.

That note sounds highly suspicious. Abigail desperately wanted to go home and it’s tough to believe she would just leave her baby forever. Days spoilers say Chad’s head will be spinning as he tries to make sense of all this.

If there’s one person in Salem you shouldn’t trust, it’s Andre. There’s a good chance that the note has been forged. Chad will remain skeptical after Andre makes his confession. However, DOOL spoilers state that Chad will pretend he has faith in Andre. He’ll hope that he can eventually get updates on what Andre is hiding.

Like Stefano (Joseph Mascolo), Andre wants Chad to be a true DiMera. He can tell that Abigail is Chad’s weak spot. Abby makes Chad a sappy softie and that’s not going to help him carry on the devious DiMera dynasty.

Did Andre swipe Abigail shortly after her getaway? Will he keep her locked up somewhere so Chad will turn to the dark side? Days of Our Lives viewers will be curious to see what Andre might be up to. It’s even possible that someone else did the dirty work and Andre is just taking advantage of an opportunity.

It’s not difficult to believe that Chad would become bitter after losing the love of his life. He went through a great deal of trouble to woo Abigail, but Ben (Robert Scott Wilson) messed everything up. In the end, Chad lost Abby and he’s sure to be truly distraught. That despair could harden Chad’s heart.

Of course, it will be a while before Chad ever reaches that stage. He’ll cling to the hope that Abigail can be found, even if she doesn’t want to be. As a result, Andre may have to take drastic action. Days buzz suggests that Andre could decide to fake Abigail’s death.

We don’t have confirmation on this yet, but it appears Andre might make it look like Abby perished in a plane crash.

It should be a wild ride over the next few months. Marci Miller will debut as Abigail this fall, but there’ll be plenty of twists between now and then. Chad is about to face some very difficult news. Stay tuned and don’t forget to check CDL often for the latest Days of Our Lives spoilers, updates and news.