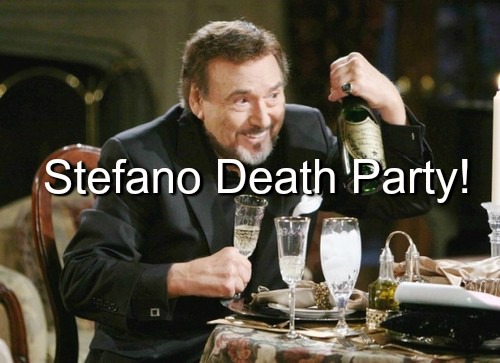 “Days of Our Lives” spoilers reveal that a big party will soon take place in an upcoming episode at the pub. DOOL fans know that we’ve seen a lot of mourning on the NBC soap over the last few months. However, a recent death will call for a celebration. Stefano (Joseph Mascolo) is gone and it will bring cheers instead of tears for many “Days” characters.

It’s no secret that Stefano has wreaked havoc on the lives of nearly everyone in town. Now that Stefano’s body has been identified, Salem can happily say so long and hope that “The Phoenix” won’t rise again. John (Drake Hogestyn), Marlena (Deidre Hall), Kate (Lauren Koslow), Victor (John Aniston) and Caroline (Peggy McCay) will gather to revel in the loss.

Hope (Kristian Alfonso) will also join in the festivities. There’s a good chance Hope will be a little nervous as she parties with the rest of this celebratory crew. After all, Hope ruthlessly gunned down Stefano in his own study.

As if that wasn’t bad enough, Hope may have killed the wrong man. “Days of Our Lives” buzz suggests that Deimos (Vincent Irizarry) was actually behind Bo’s (Peter Reckell) kidnapping.

Nevertheless, Hope might start to let her guard down as everyone opens up about Stefano’s dirty deeds. Even though Stefano probably wasn’t to blame for everything that happened with Bo, he’s done plenty to deserve what he got.

Hope’s actions were wrong, but she was a woman who had been pushed to the edge. Let’s just say nobody but Chad (Billy Flynn), Andre (Thaao Penghlis) and Theo (Kyler Pettis) will truly care.

Of course, DOOL viewers will certainly miss Stefano and all of his schemes. He was undoubtedly one of the greatest villains to ever grace the soap world. At least we should get fantastic flashbacks at this death party. We might even see other Salemites remember the torment they’ve faced thanks to Stefano.

We should point out that Stefano isn’t entirely out of the picture yet. He’ll appear in Chad’s vision next week as well. Plus, Stefano’s presence will always linger in Salem. The town’s residents will never forget the trouble Stefano stirred up through the years. Stick with “Days of Our Lives” for updates on the show’s tribute to Stefano and his portrayer, Joseph Mascolo.

So “Days” fans, what do you think about the news that we’ll see a party to celebrate Stefano’s death? Are you hoping for some epic flashbacks to honor Stefano’s villainous legacy? Voice your opinion in the comments below and don’t forget to check CDL often for the latest “Days of Our Lives” spoilers, updates and news.