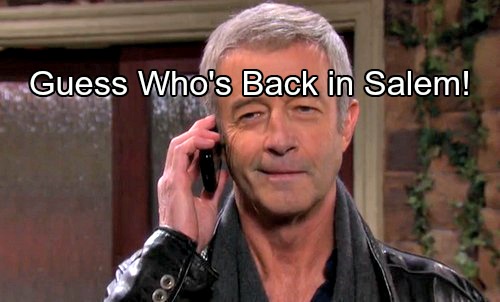 Days of Our Lives (DOOL) spoilers tease that the summer excitement is just getting started on the NBC soap. We have numerous returns on the way and some of them could surprise you. According to Jason47’s Days website, several familiar faces will pop up before and after the Olympics.

If you haven’t heard the news by now, Days of Our Lives will be taking a two-week hiatus while the Olympians compete this August. You can check out all of the action if you’re into that sort of thing. If not, you can wait for the drama to resume on DOOL and read our special Days reports on CDL. We have plenty to look forward to!

Before the games begin, we’ll see Sonny (Freddie Smith) make a return trip to Salem. Most Days fans are ready for Sonny’s homecoming. Some people absolutely adore Sonny. Others just think he’s OK. However, you won’t find many people that hate Sonny. He’s one of the sweetest guys around!

Sonny will get updates on Adrienne’s (Judi Evans) engagement to Lucas (Bryan Dattilo) and he won’t exactly approve. He’ll want his mom to be happy, but he’ll wish she could’ve reunited with Justin (Wally Kurth). Nevertheless, Adrienne is in charge of her own love life and Sonny will just have to live with her decision.

Losing Will (Guy Wilson) was hard for Sonny, especially since they never had the opportunity to work things out. Still, Sonny has accepted the reality of the situation. He may even be open to finding love again with Paul (Christopher Sean). Days of Our Lives spoilers say these former flames might be drawn to each other once Sonny is in town.

Of course, Sonny isn’t the only DOOL character making a comeback. Jennifer’s (Melissa Reeves) mom, Laura (Jaime Lyn Bauer), will return for a few episodes as summer starts to fade. That’s not as good as Sonny’s lengthy stint, but we’ll take it! You can also expect Jack (Matthew Ashford) to appear again before summer comes to a close.

In addition, Clyde (James Read) will return to stir up a little trouble. There’s no word yet on the length of Clyde’s stay, but it should be fun to see this Poplar Bluff varmint. Even a scene or two will grab our interest.

There’s a chance that Clyde had something to do with Abigail’s (Kate Mansi) disappearance. Andre’s (Thaao Penghlis) death story is bogus. We’re not sold on the idea that Abigail would just ditch Chad (Billy Flynn) and Thomas either. Clyde is still in prison, but his cronies could easily do his dirty work for him.

Maybe Ben’s (Robert Scott Wilson) proud papa sent someone to seek revenge for Abigail’s barbecue. Regardless, Clyde will be back along with some other mystery returns. It hasn’t been confirmed, but there’s strong buzz that suggests Xander (Paul Telfer) could show up to wreak havoc.

Xander is stuck in the slammer, but he could get out down the road. If Xander doesn’t reenter the picture this summer, he might arrive in the fall. We’re even hearing rumblings that Vivian Alamain (Louise Sorel) might resurface to cause some chaos. It’s certainly something to watch out for.