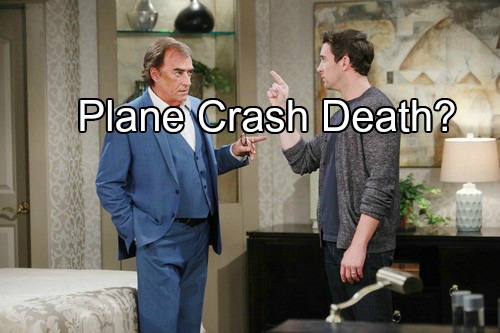 Days of Our Lives (DOOL) spoilers tease that Andre’s (Thaao Penghlis) scheme will fall into place. Chad (Billy Flynn) told Andre that he could have anything he wanted if he’d help him get answers about Abigail (Kate Mansi). However, it’s clear that Chad doesn’t trust his brother.

After Andre left, Chad made a phone call and ordered someone to follow Andre’s every move. He’s playing Andre in hopes of getting additional info on Abigail’s location. Of course, Chad is probably underestimating Andre. A good DiMera knows how to pull off a plan without getting caught.

Andre put his plot in motion and he’ll be pleased with the results next week. Days spoilers say Andre will inform Chad that his beloved wife was on a chartered plane that recently crashed. Chad will suggest that this is just some bogus story Andre cooked up, which is exactly right.

Nevertheless, Andre will assure Chad that the tip he received is solid. He’ll show Chad proof that points to Abigail’s death. Chad is already in a fragile state, but this news will really send him over the edge. Days of Our Lives spoilers reveal that Chad will be on the verge of a total breakdown.

As Chad starts to lose it, Jennifer (Melissa Reeves) will become extremely concerned for Thomas’ well-being. This will only add to the list of issues Jennifer’s worried about. DOOL viewers know that Jen is suspicious of Chad’s connection with Ciara (Vivian Jovanni). She’s beginning to wonder just how deep their bond is.

Jennifer realized Ciara was growing closer to Chad after their conversation in the square. She also witnessed a warm moment between this troubled husband and the lovesick babysitter. Once Jennifer gets updates on Abby’s accident and Chad’s subsequent meltdown, she’ll try to protect her grandchild.

Days of Our Lives spoilers indicate that Jennifer will confront Chad about his outburst. She’ll insist that it isn’t safe for Thomas to be around him. The fact that Andre is lurking around certainly doesn’t help. Jennifer doesn’t trust anyone bearing the DiMera name.

Chad will lash out at Jennifer for implying that he’s an incapable parent. He’ll likely throw her own problems back in her face. After all, Jennifer’s painkiller addiction kept her away when Abigail desperately needed her mom.

Jen was too drugged up to see any signs of her daughter’s insanity. Plus, Jennifer’s struggles undoubtedly added to Abby’s mental strain. Days spoilers say Chad and Jennifer will have a heated confrontation about who would provide a more stable environment for Thomas.

Jennifer is off the painkillers now and she’s relying on loved ones for support. Doug (Bill Hayes) and Julie (Susan Seaforth Hayes) are doing their best to keep Jennifer on track.

Still, Chad will intend on fighting for his son. It’s tough enough to lose Abigail. Chad could completely crumble if he doesn’t have Thomas to focus on.

It sounds like this custody battle will cause major drama. Chad should be a wreck by the end of all this. Stay tuned to DOOL and don’t forget to check CDL often for the latest Days of Our Lives spoilers, updates and news.