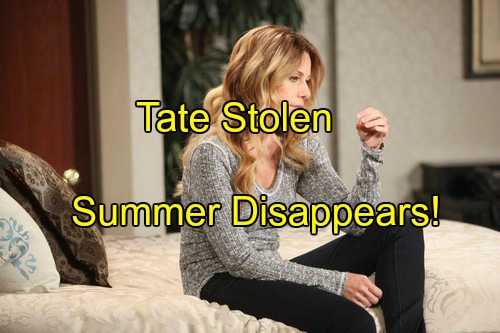 Days of Our Lives (DOOL) spoilers tease that Summer (Marie Wilson) is about to stir up big trouble. Summer recently received a satchel of cash, some instructions and several photos of her meeting with Clark (Josh Burrow). When Summer gave Dario (Jordi Vilasuso) updates, he was a little concerned.

If the person tailing Summer knew about her interactions with Clark, he or she probably watched Dario help her get rid of the body. Still, Summer insisted that she couldn’t follow the orders. Someone wants Tate kidnapped! Summer just can’t do that to Brady (Eric Martsolf) – at least that’s what she’s telling herself at the moment.

Nevertheless, that’s a hefty wad of dough and it’s tough to believe Summer will be willing to pass it up. Besides, the blackmail threat is too strong. Summer doesn’t want to go down for murder, especially when it was simply a mixture of self-defense and a freak accident. With that in mind, Summer may end up swiping “Tater Tot.”

Days viewers know that Victor (John Aniston) caught Theresa (Jen Lilley) sleeping when she was supposed to be watching Tate in the park. He scolded Theresa and assured her that he’d help Brady see the light. Victor thinks Theresa is scum and he’s not about to let her destroy Brady’s life.

Of course, Days of Our Lives fans can see that Theresa has changed for the better. Brady wants Victor to understand that, but it’s just not happening. Could Victor be behind this kidnapping stunt? He always seems in the loop when it comes to Summer’s activities. Victor keeps tabs on everyone in Salem.

Victor could easily have Summer followed to make sure Tate isn’t in any danger. This could be Vic’s way of teaching Brady a lesson about his choice in women. Victor might intend on returning Tate once Brady and Theresa’s relationship has completely disintegrated. He could hope that Brady would push for sole custody.

If all of this is true, Victor’s plans could go awry. DOOL spoilers indicate that Summer will board a plane with a crying child. We can assume the kiddo is Tate. Later, Summer will engage in some shady business. It sounds like Summer will hand over Tate at an undisclosed location.

Next, Summer will try her best to disappear. This could leave Theresa and Brady on a desperate search for answers. Days of Our Lives spoilers say Theresa will blame Brady for bringing this destruction to their lives. The rift is already starting to develop.

Victor is certainly a likely candidate as the mastermind of this scheme, but that doesn’t mean someone can’t hijack the plot. Some mysterious villains are set to pop up this summer. One of them might intervene in this situation.

It’s worth mentioning that Kristen would make perfect sense as the person to kidnap Tate, but Eileen Davidson tweeted that she wasn’t making a Days return right now. It’s possible that Davidson is fibbing to throw people off track, but she’s also been pretty busy at The Young and the Restless.

Another option might be that Kristen will take Tate, but we won’t see her anytime soon. For all we know, Tate could be gone for years. That would actually be an interesting way to write Theresa out. She could believe her son is dead or at least gone forever. Theresa might leave town in despair.

If Theresa wanted to come back someday, the door would still be open. Plus, how cool would it be if a SORAS’d Tate showed up down the road? He could return as a teenage Christopher DiMera. That would definitely shake things up.

However, it’s a bit too early to predict the endgame here. We’ll pass along any news that emerges about this DOOL storyline. Stay tuned and don’t forget to check CDL often for the latest Days of Our Lives spoilers, updates and news.