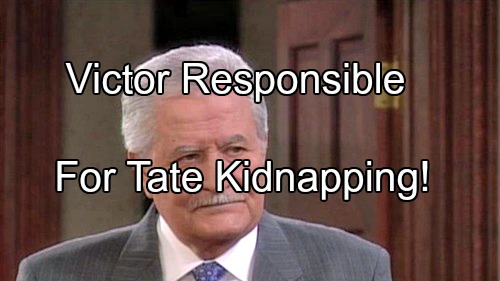 Days of Our Lives (DOOL) spoilers tease that Victor (John Aniston) will struggle to get himself out of his latest jam. After Caroline (Peggy McCay) took a look around the hotel room that Tate was believed to be in, she had a shocking vision. Caroline caught a glimpse of Victor on the phone in that very room.

Naturally, Caroline confronted Victor about what she saw. Victor insisted it was all “hocus pocus,” but Caroline could tell that something was off. Later, Victor drank alone and remembered having that phone conversation. A British woman on the other end said, “It’s done.”

Victor warned this woman that absolutely nothing could go wrong, but we’re betting it did. That’s probably the twist in this storyline. DOOL made Victor look guilty, but then backed off so that everyone was convinced of his innocence. Now Victor seems guilty once again, but perhaps he’s not quite as evil as we think.

There are some questions that Days will need to answer eventually. The clerk at the inn said a British woman checked into that room with a baby and checked out a couple of hours later. Who was she and what role did she play in all of this?

It’s possible that the woman Victor talked to was Dominique (Julia Farino), the British lady that made some sort of deal with Summer in Las Vegas. However, we should also consider the possibility that Summer made another deal and the whole thing was a red herring. Days of Our Lives has been leaving us out of the loop on some crucial facts.

Why was Tate in a room with a British woman? Weren’t we supposed to believe that the exchange went down with Summer in Vegas? Several puzzle pieces are missing right now.

John (Drake Hogestyn) and Brady (Eric Martsolf) are on their way to Indianapolis to learn more about the woman they believe took off with Tate. They found her name on a flight list and the clerk confirmed that her description matched what he remembered. Days should give us updates soon.

In the meantime, let’s get back to Victor. What if Victor was talking to someone besides Dominique? Could Victor have been on the phone with Emma (Claire Jacobs), Tate’s nanny? Theresa (Jen Lilley) gave Emma some attitude shortly before Tate’s kidnapping.

We have to remember that someone drugged Theresa’s protein smoothie that morning. Did Victor pay Emma to slip something in Theresa’s drink? Perhaps Victor just intended on Tate being taken from a dazed Theresa and kept in that hotel room long enough to give Brady a good scare.

That’s when everything may have gone horribly wrong. Someone else could’ve become privy to Victor’s plans and hijacked the plot. Otherwise, wouldn’t Victor have returned Tate by now? Would Victor really just let his great-grandson be kept from his parents forever?