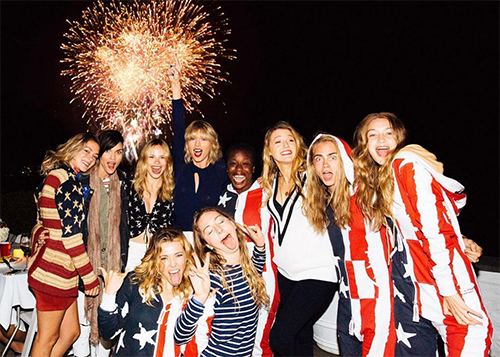 Demi Lovato once again has a problem with the way celebrities are portraying unrealistic body ideals in the media. This time around, the singer is targeting Taylor Swift and her squad of super skinny model girlfriends, claiming that none of the women involved have ‘normal bodies.’

This isn’t the first time that Demi Lovato has shared her rather strong opinions about how the average woman should look and, furthermore, be portrayed. Demi has made it no secret that she has long struggled with her own body image. She experienced years of bulimia and substance abuse during what she recalls as the darkest period of her life. And while she’s managed to move past it and is in a much better place both emotionally and physically, she’s still lashing out at ‘thin women,’ who Demi thinks are overrepresented in the media.

In a new interview with Glamour Magazine, Demi clearly threw some shade at Taylor Swift, along with her squad of girlfriends, which include Gigi Hadid, Karlie Kloss, Cara Delevingne, and more. She said they don’t represent what ‘real’ women look like.

Demi said, “And I think every woman does her part in some way. But I think in certain situations, certain people could be doing more if they’re going to claim that as part of their brand. To be honest, and this will probably get me in trouble, I don’t see anybody in any sort of squad that has a normal body. It’s kind of this false image of what people should look like. And what they should be like, and it’s not real.”

And while Demi has been preaching for women like herself to love and accept who they are no matter how they look or what size jeans they wear, the former Disney star seems to be doing quite the opposite as she’s tearing down women who don’t fit within her standards or body ideals.

With that being said, Demi Lovato does herself no favors by shading other women in the entertainment industry, especially when she is judging other females by the way they look. What might look normal for one woman might look totally different for another, yet Demi Lovato has taken it upon herself to elect what the new standard should be. The last thing Demi should do is call out other women for their bodies. Do you agree, CDL readers?

We go fast with the game we play. @haimtheband @lilyaldridge

“It’s a little invention I made earlier…” Mother Chucker @Caradelevingne