Demi Lovato Headed For Another Meltdown: Singer Spotted Looking Tense During Night Out In West Hollywood? 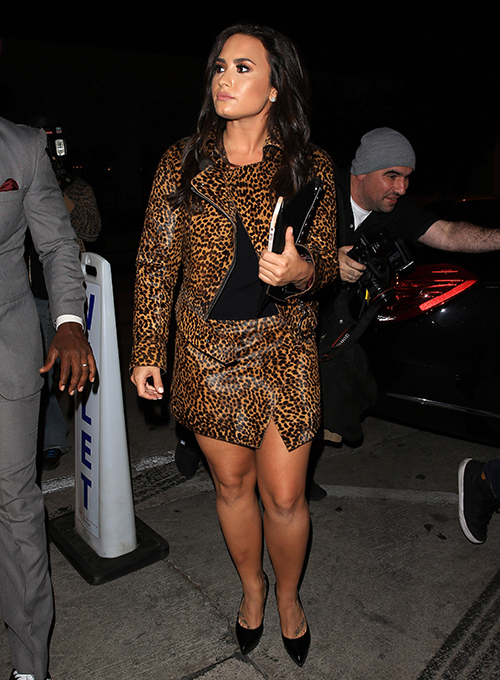 Singer Demi Lovato has once again managed to turn heads with a skin-tight outfit she wore during a night out with friends. The ‘Cool for the Summer’ singer was spotted wearing a leather leopard print skirt and jacket while dining out at Catch restaurant in West Hollywood over the weekend.

While Demi’s outfit suggests that she was feeling comfortable with showing off her curves in public, the tense expression on her face tells a different story. The singer looked absolutely stone-cold during her dinner. Even though Demi tells her fans and young girls to love themselves just the way they are, Demi doesn’t look one bit happy herself in these photos.

Is Demi Lovato battling with depression again? Is she having a hard time with her own body image, even though she’s been preaching self-acceptance for years now? Has Demi hit a breaking point once again? Whatever the case may be, there’s no denying that Demi is hiding something behind the strained look on her face, and it’s definitely not joy or happiness for that matter. That, and the fact that she’s been having so many Twitter meltdowns and picking feuds with other celebrities like Taylor Swift, indicate that something troubling is going on.

Demi Lovato is simply not happy, but she keeps on putting herself in the spotlight even though it’s the last thing she should be doing. With someone who has battled mental and bipolar depression along with eating disorders, it’s surprising that there’s no one in her inner circle to give her the help that she desperately needs. Not only does she need to take a break from her music, but she needs to stay away from Hollywood altogether if she is to ever recover from her deeply-rooted problems.

Sure, Demi told fans that she would be taking a break from the music business to focus on herself and her needs, but she’s still making public appearances and going to Hollywood-area restaurants knowing the paparazzi would be there.

If Demi absolutely wanted to stay out of the limelight, she could, but obviously she’s in desperate need of some sort of attention. Otherwise, she wouldn’t be wearing a tight leopard print skirt at a trendy West Hollywood restaurant, knowing that she will end up making headlines one way or another.

Take a look at our photo gallery below and tell us, do you think Demi Lovato looks like she’s on a verge of another meltdown? Also, check back with CDL right here for all the latest news on Demi Lovato.