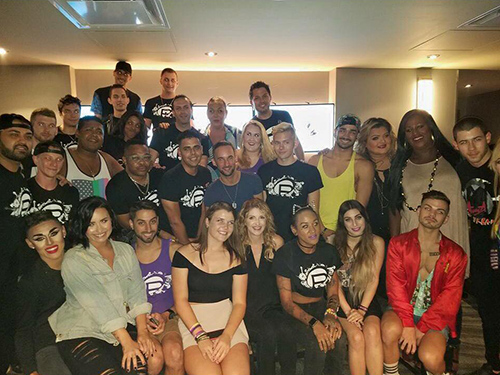 Demi Lovato and Nick Jonas, both advocates for the LGBTQ community, reached out to Orlando’s Pulse Nightclub staff and gave them a full VIP concert treatment. They surprised workers of Orlando’s Pulse Nightclub with a full package, which consisted of a private suite and a clear view of the singers’ touching tribute to those lost in the recent tragedy. Nick and Demi also paid tribute to Christina Grimmie, the talented young singer and The Voice contestant who was shot dead during a performance.

Approximately thirty staff members were invited to the Saturday, July 2nd show, which was held at the Amway Center. Additionally, the two hot pop stars hooked up the crew with a private meet and greet. Pulse posted a group photo with their staff intermingled with Nick and Demi, and captioned the pic with these kind words: “Nick Jonas & Demi Lovato thank you for making the pulse family smile ‪#‎onepulse‬ ‪#‎orlandostrong‬ ‪#‎pulseorlando‬”

Demi posted a pic of herself on stage wearing a beautiful rainbow piece and captioned it with the following sentiment: “I adore you Miami. Thank you. #loveislove ❤️💛💚💙💜 #hondacivictour @futurenowtour”

Following suit, Nick posted a pic and said, “Orlando you were incredible last night. Thank you @andradaymusic for helping DEMI and I are honor the victims of the terrible acts of violence recently. #riseup #hondacivicfuturenowtour”

Check out the video below of the tribute performance and let us know what you think in the comments section below. Keep checking CDL for all your celebrity news and updates!