Is Nick Jonas To Blame For Demi Lovato And Wilmer Valderrama’s Breakup? 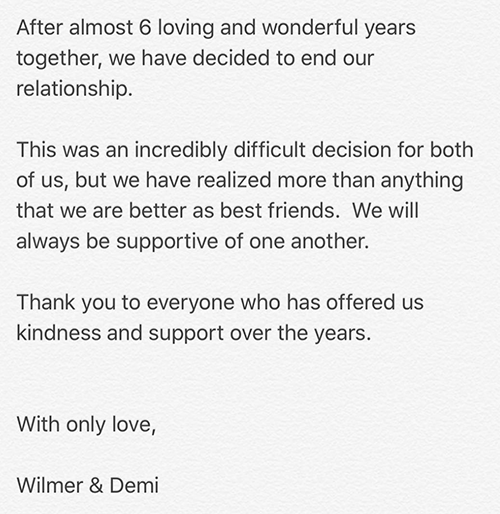 After the recent split of Demi Lovato and Wilmer Valderrama, claiming their beautiful 6-year romance ended on good terms, sources told the print edition of In Touch Weekly that their breakup was anything but cordial. The two even released a statement saying they were parting without any animosity. Wilmer broke up with Demi because he thought she was cheating on him. The other guy? Nick Jonas.

The source revealed there was no actual infidelity going on, but Wilmer didn’t buy it. He has his suspicions and that’s what tore the lovers apart. To compound things even further, Wilmer Valderrama wasn’t cool with how close Nick Jonas and Demi Lovato had become over recent weeks.

And really, we can see why he’d be worried. The two are heading out on a joint tour this summer. Preparing for something like that takes many hours of rehearsing, which correlates to spending many hours together – hours where you’re in close proximity to each other and where there’s the potentiality for intimacy.

With Demi Lovato spending all this time with Nick Jonas, we can totally see why Wilmer Valderrama would be unhappy. The source stated that the fighting spilled over to their home life. Wilmer eventually refused to listen to reason, letting his doubts tear them apart in the end.

An insider said of their breakup: “[Valderrama] told her he thought she was in love with Nick. They would scream at each other and it sounded like the house was going to fall down. Wilmer found texts from Demi begging Nick to talk to her and he blew up.”

If it’s one thing we can honestly say about Demi and Wilmer’s relationship, it was certainly beautiful up until the very end. We might never know if this report is true or not. One thing we do know for certain is how supportive Wilmer has been of Demi during some of her most difficult times. He wasn’t only there for her when she struggled with her addictions to drugs and alcohol. He was right by her side during rehab and afterwards too. They kept their relationship mostly private, but Demi would often speak very kindly of Wilmer. She even revealed, when pressed, that she hoped they would become engaged, but Wilmer never proposed.