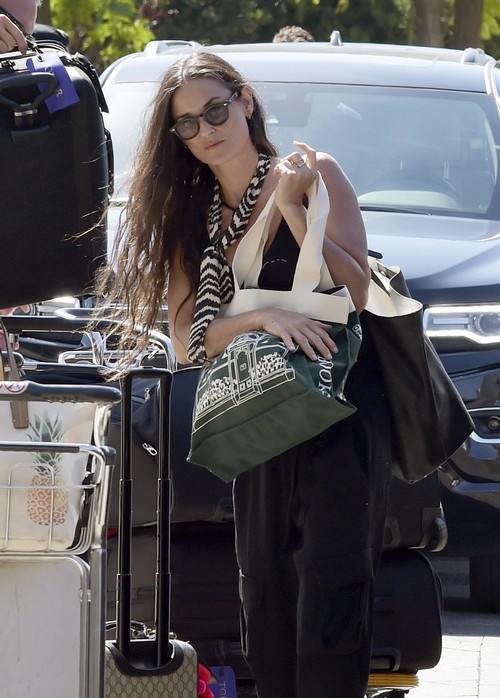 Despite Mila Kunis being pregnant Demi Moore is allegedly calling Ashton Kutcher non-stop. It’s been years since Demi Moore and Ashton Kutcher have been last attached and they’ve supposedly both moved on with a number of new partners.

Demi has dipped her toes in the dating pool with boy toys such as art dealer Vito Schnabel and Dead Sara drummer Sean Friday after Kutcher pulled the plug on their relationship back in 2011.

Ashton Kutcher, meanwhile, has been in a steady relationship with actress Mila Kunis. The couple already has an almost 2-year-old daughter, Wyatt, and is expecting another baby on the way, which apparently has left Demi in a tizzy. There’s a new rumor that says the 53-year-old has allegedly completely “lost it” ever since she heard that Mila is expecting another baby with her ex-spouse.

Ashton and Mila have made it no secret that they are not only madly in love with one another, but that they are enjoying their lives out of the celebrity spotlight, despite being two of the most recognizable names in Hollywood.

The couple hasn’t even made an official pregnancy announcement to the media and if it weren’t for the paparazzi photos of the young actress baring her baby bump, they could easily keep their baby joy well hidden until after she gives birth.

Yet, the news is out and it’s affected Demi Moore so bad that she can’t stop calling her ex-husband, even when she has no reason to be doing so.

One source tells In Touch Weekly, “Demi hasn’t fully gotten over their divorce and can’t seem to stay out of his life. She’s also lonely – she hasn’t had a significant man in her life since Ashton.”

Not having a man in her life is one thing, but obsessing over your ex and his new wife is another. Demi Moore is after all a mother to three adult daughters and is still considered one of the most beautiful women in the business.

Clearly she could do something with her time other than occupying her every thought with her ex Ashton Kutcher and his pregnant wife? Many of Demi’s close circle of family and friends have even noted that she wasn’t this preoccupied with her ex-husband Bruce Willis back when they divorced in the late nineties.

As far as Ashton Kutcher and Mila Kunis are concerned, keeping to themselves and eventually changing their phone number might be a good thing if Demi Moore keeps this up in the future.

Demi Moore is spotted arriving at the airport in Ibiza, Spain with a friend on July 12, 2016 by FameFlynet