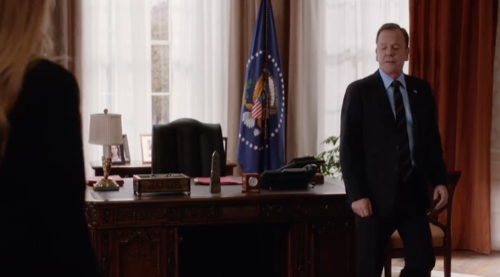 Did you watch last week’s Designated Survivor where when shots ring out at The White House during a Governors Summit, President Kirkman’s plans at electing a new Congress were thrown into turmoil, while Agent Hannah Wells continued investigating the Capitol bombing?  If you missed the episode we have a full and detailed Designated Survivor recap, right here.

On tonight’s Designated Survivor as per the ABC synopsis, “President Kirkman negotiates a hostage exchange involving the CIA, the Russian government and an American track-and-field coach. Elsewhere, FBI Deputy Director Atwood worries for the safety of his family after he and Hannah uncover information about the Capitol bombing.”

#DesignatedSurvivor starts with dead Nassar’s crime scene and photos being taken. Hannah stands outside the door upset that he was killed. Atwood wants everyone’s name that was there, all camera footage, and all evidence.

Atwood says whoever blew up the Capitol killed Nassar. She says they need to press on with the only lead they have. Atwood thinks the killers will come for them too. Kirkman holds a press conference about the Yankees game after 9/11.

He has the US Track and Field team there and thanks them for competing. Kirkman talks to Coach Weston who is a record-breaker himself. Wyatt calls Kirkman because MacLeish is there. Weston tells him they believe him.

Dinner with the enemy

The Kirkmans and MacLeishes sit down to dinner and share their meet cute stories. Emily and Aaron sit in his office. The game is on and they talk about MacLeish as VP. She wants Kirkman to hurry up and nominate him for the position.

Aaron takes a call and goes to alert the President. MacLeish’s wife asks what it’s like living in the White House. Aaron pulls Kirkman out and tells him about Nassar’s death. He tells POTUS that he was poisoned and they call Atwood to the White House to explain.

Kirkman comes back in and tells them he can’t finish dinner. MacLeish offers to help him in any way that he can. He leaves them. Hannah tells Atwood to tell him everything they know about MacLeish. She says he has closer ties than Nassar to the bombing.

Atwood is admitted to the Oval and finds MacLeish there with Kirkman. POTUS explains he asked him to join them since he was on the security committees. Atwood says they don’t have a lot of intel yet and he says Nassar wasn’t cooperative before he died.

Kirkman chews him out for not getting answers. Atwood says he wishes he could say more. Kirkman asks why he said he has answers. Atwood gets cagey and then leaves. Kirkman tells MacLeish that made no sense and MacLeish says he’s sure the FBI is on top of it.

Kirkman comes to bed much later and tries not to wake Alex. She says he’s late to bed habitually now. He says he got the feeling Atwood was lying to him. She says give him some time. Kirkman tells Aaron to stay on top of the investigation.

Emily says Coach Weston was arrested in Russia for carrying vials of HGH and says it’s an embarrassment to the nation. Atwood meets Hannah and tells her he needs to meet with POTUS without MacLeish there. She has nothing more on Catalan.

She says she’s going to see another source today. Emily makes calls about Weston. Seth asks to see POTUS. Aaron says he has no time to talk to him. Seth says this is about Lisa and Leo’s biological father. Aaron says Seth can see POTUS now.

Seth talks to Kirkman and he says he knows about it and he refused to take a paternity test since he and Alex were happy. Emily says the guy was in prison for tax evasion over $46 million. Kirkman asks what the reporter wants and Seth says just a comment.

POTUS vs the wife

Kirkman says hold her off as long as you can. Aaron says Alex already knows about this. He says he talked to her and Alex told him she’d talk to him. Kirkman comes to confront his wife angrily. She says he’s been busy and Alex gets back in his face.

Alex says maybe they never should have kept the truth from Leo. Kirkman says Seth will buy them some time. Alex says she can go talk to her ex and try and fix it. Kirkman gets a call and says the Secretary of State is there with Paulson.

He goes to the ops room. They tell him they need to talk about Weston. She says they need to get him back home immediately. Turns out the coach is really CIA. Wow.

Hannah goes to meet a contact of her and he says the CIA doesn’t want to play with the FBI. She name drops Catalan and her contact asks where she heard the name. He takes her outside and says stay out of it or else. He says the guy is a mercenary and traitor.

Hannah asks for more and he says walk away and that’s the best thing for her. Kirkman meets with the Russian Ambassador Petrov to discuss Weston. He says it’s a shame to meet under this circumstance. He says Weston violated serious laws.

Kirkman asks why he brought a ministry representative. Petrov says they both know Weston is a US asset. Kirkman says they don’t see eye to eye and then says both countries should deal with this quickly and quietly. He asks what Petrov wants.

He says he wants all US nuclear weapons out of Turkey. Kirkman says no and Petrov says Weston will face the Russian courts. The press asks Seth about Nassar and where he is and then they ask about Weston. Seth offers assurances there too.

Seth speaks to Lisa afterwards and pulls her to speak privately. He says can you please hold the story for as long as possible. He says he’s begging. She says 24 hours and that’s all she can do. He thanks her and she goes.

Hannah updates Atwood. They are stunned to see MacLeish show up at the FBI. He asks to speak to Atwood. Hannah steps out. Atwood says another unexpected meeting. MacLeish says he knows he’s vetting him for VP and hands him his service records, medical exams, and tax returns.

Face off at the FBI

Atwood asks if those are official documents. He says they have to do their own vetting too. Atwood tells MacLeish what’s not on paper also matters and the impressions we leave behind. He says that’s the true measure of a man.

MacLeish says neither of them want the wrong person in office. They spar verbally and MacLeish thanks him then goes. Hannah comes back in after he leaves. He says that go guy gave them 10 years of papers they never asked for. Hannah says he something to hide.

Weston makes a public statement that’s a confession. Emily has an idea for how to save Weston. She suggests a different trade. They get to work on it. Alex goes to see Myers at his prison. He remarks that she did well and she says he didn’t. She asks what he wants.

Myers wants out of prison

Alex says he’s always working an angle. He says he wants her to get him out or else. Hannah and Atwood wonder how to connect MacLeish to Nassar. She thinks Catalan is the connection. Atwood gets a call that says his son is missing.

He says to call the police and ends the call. He tells Hannah what happened and he leaves. Hannah stares at a photo of MacLeish and ponders. Aaron and Emily walk Kirkman into a meeting. He meets with the Saudi ambassador.

Kirkman asks him to make a deal. He works with the Saudis and Russia. He offers to give back four Saudi nationals to the ambassador. He asks for the Russian agent they picked up in Riyad. Kirkman plays middle man and both ambassadors are intrigued. All three want their spies back.

Alex tells her husband what Myers wants. She says Myers wants him to get him out of parole. She says he’s an opportunist with a credible threat. Kirkman says he never thought he’d be dealing with this again. He says he feels like his son.

Kirkman says he should have listened to her back then and got tested. He says Leo has a right to know who his real father is. His phone buzzes. He has to go to command ops. Atwood meets his wife Yvette who is in a panic looking for his son.

He sends his wife home and says he’s going to go find him. Kirkman is told the spy exchange is happening right now. They watch the feeds and Kirkman is told the Russians never put Weston on the plane. Hannah calls Atwood and he worries this is about MacLeish showing up.

He says MacLeish’s kid was taken the night of the attack. He says this is his fault. Kirkman is shown footage of Mishkin who recruits FSB assets and he’s with Weston. He made contact and now it looks like Weston is a double agent. That’s why he didn’t come home.

Hannah goes back to her CIA friend and demands he tell her about Catalan. Hannah tells Tim she’s out of time and says someone is in trouble that she cares about. She begs him. He says he’ll try. Petrov comes back to see Kirkman who tells him that he played him.

Kirkman congratulates him and Petrov says maybe Weston just liked Moscow. He tells Kirkman he’ll understand better when he’s been in the game more than a month. Kirkman says nothing is more dangerous than a pawn that thinks it’s a queen. He sends him away.

Seth goes to see Lisa and says he has an exclusive for her. He tells her Kirkman is a good man and he never asked for this job. He says she’s wrecking a 17 year old’s life. He offers her the inside scoop on Weston. She’s intrigued.

Aaron gives him a folder of work and Emily asks about MacLeish. They push him on nominating the VP. Emily says the country needs good news. Kirkman says he’s waiting on the FBI. Aaron tells him Atwood has been out of the office on personal business all day.

Kirkman finds his son and tells him that he loves him. Hannah is in a parking garage. She hears a loud noise behind her then the squeal of tires. She pulls her gun. She finds an envelope on the seat of her car with a CIA folder inside.

She reads the file on Catalan and remembers seeing his face among the soldiers at Nassar’s prison. Hannah tries to call Atwood but he’s at the ball field looking for his son. A woman approaches him and shows him a video of his son.