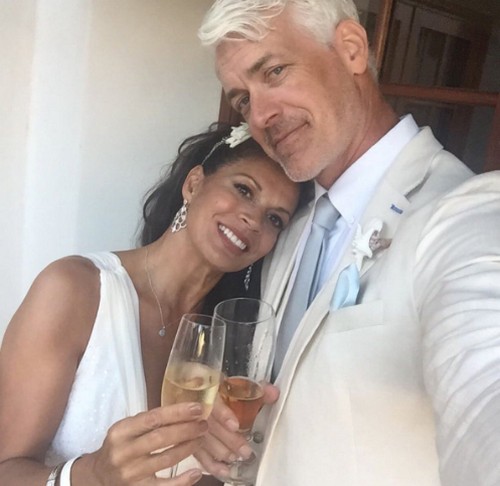 Clint Eastwood’s ex-wife Dina Eastwood is officially a married woman (again). Dina took to social media over the weekend and shared a photo with her new husband Scott Fisher, a basketball coach at the University Of Hawaii. Dina captioned the photo, “I went fishing and got married tonight to Mr Fisher! Mrs Fisher Finally!#dreamcometrue #7116 #destinyserved We love and adore our IG family!”

Dina Eastwood and Scott Fisher’s Instagram fans rushed to the comment sections to congratulate the happy couple. It’s amazing that Dina got a happily ever after, and obviously we couldn’t be any happier for her.

But if you followed the Clint Eastwood divorce saga, then you know that Dina’s happily ever after with Scott Fisher is a bit … odd.

Scott Fisher and Clint Eastwood performed a real life Celebrity Wife Swap, just like the horrible reality TV show. Back in 2013 when Clint Eastwood confirmed his divorce from Dina, the actor stepped out with his new girlfriend…Erica Tomlinson Fisher, Scott’s ex-wife!

It’s unclear how the wife swap came about, the parties involved weren’t exactly forthcoming with details, which only gives our imaginations an excuse to run wild.

Eventually Clint and Erica’s casual relationship dissolved, but Dina and Scott kept going strong. After three years together, and an engagement, the couple is officially married and they seem happier than ever.

Congratulations are in order for the happy couple. We can’t help but wonder how Clint Eastwood feels about the interesting turn of events. Let us know what you think in the comments below!