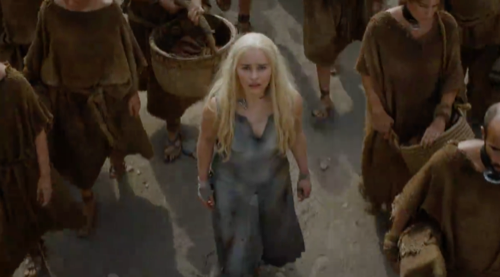 Tonight on HBO, Game of Thrones is back with an all new Sunday, May 8 season 6 episode 3 called “Oathbreaker.” We’ve got your recap and finale spoilers down below! On this evening’s episode, Bran (Isaac Hempstead-Wright) glimpses the past; Daenerys (Emilia Clarke) learns what’s in store for her.

On the last episode, Bran (Isaac Hempstead Wright) trained with the Three-Eyed Raven (Max von Sydow). In King’s Landing, Jaime (Nikolaj Coster-Waldau) advised Tommen (Dean-Charles Chapman). Tyrion (Peter Dinklage) demanded good news, but had to make his own. Did you watch the last episode? If you missed it, we have a full and detailed recap right here for you.

On tonight’s episode per the HBO synopsis, “Bran glimpses the past; Daenerys learns what’s in store for her; Tommen faces the High Sparrow; Arya trains to be No One; Varys comes up with a solution to a vexing problem; Ramsay gets a gift.”

Jon Snow wakes up. He breathes heavily. Davos stares at him – the very much alive Jon Snow. His Dire wolf also looks on. Melisandre stands by, too. They talk about what he remembers. Jon Snow says that he shouldn’t be here. Melisandre asks him what he remembers after the men stabbed him. He says, “Nothing. There was nothing at all.”

Jon walks out of his quarters and is greeted by his men, mostly the Wildlings that have come to show him support, including Tormund.

Gilly and Samwell are on a ship heading south.

Bran glimpses into the past with the guidance of the Three-Eyed Raven. He tries to reach out to his father, who’s involved in a battle, but, obviously, he doesn’t respond.

Meanwhile, Daenerys continues journeying with her captors; soon, she’ll learn of her fate. One of the men says, “Welcome home, Khaleesi,” and she’s taken into the residence where Khal widows are to live out the rest of their days. The women in there strip her of her clothes and present her with new rags. Daenerys says that they have made a great mistake. The woman in charge asks her why she didn’t come to them after Khal Drago died. The woman says that her fate will soon be determined and, if she’s lucky, she will be allowed to stay with them. But, she broke a great law: traveling the world once her Khal died. So, Daenerys’s future is uncertain.

Varys confronts a woman who helped conspire against the Queen’s soldiers. She says that she can’t give him any information about the Harpies, as they’ll surely kill her. Varys says that he will help get her and her son to safety on a ship leaving at dawn should she decide to give him the information he needs.

Meanwhile, Cersei and Jaime form a plan to get their feet up on the current situation plaguing their lands. They figure out that they need to employ the Mountain’s services to deal with the High Sparrow – in some way. Jaime and Cersei then proceed to crash a high council meeting, but the members don’t take well to the intrusion and walk out.

Tommen addresses the High Sparrow. Tommen demands that his mother be able to see her daughter’s burial place. The High Sparrow denies this request, saying that she will not be allowed to do this until she atones in front of the 7 Septons.

Meanwhile, Jaqen continues to train Arya in the faceless ways. Her training is brutal; and she’s beaten as she’s interrogated.

Jaqen says, “If a girl tells me her name, I will give her eyes back.” Arya responds with, “A girl has no name.” Jaqen tells her to come and he presents her with a cup of water from the poisonous pool. He tells her that if she is truly no one, then she has nothing to fear. She drinks, opens her eyes, which are now clear and seeing. Jaqen asks, “Who are you?”

Ramsay Bolton continues his quest to take the North. His men bring to him Rickon Stark.

At Castle Black, Jon Snow addresses the men who orchestrated his murder. They are about to be hanged, and he asks for their last words. After the fact, he says that his duties as Lord Commander have ended. He says he’s done. “My watch has ended.”