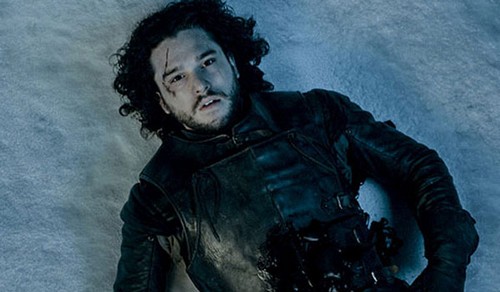 “Game of Thrones” Season 6 spoilers tease that there may be more to come for Jon Snow (Kit Harrington) even though he seems dead as a doornail. Will he be revived by red lady Melisandre (Carice van Houten) and go on to fulfill a far greater destiny than being Lord Commander of the Night’s Watch?

Since the brutal Game of Thrones Season 5 finale where Snow got Julius Caesared by his brothers on the Wall, many have felt this was an anti-climactic ending for a man whose parentage, much less potential, was never fully explored. And for those that rely on George RR Martin’s books for answers, he’s not written this yet.

#1 Dead is only dead on GoT if you’re decapitated, burned on a pyre, or dismembered.

#2 Jon Snow has magic – he’s a warg and his spirit might be biding its time in Ghost, his direwolf.

#3 Melisandre has tons of magic – and she’s conveniently on hand and needs a new king to follow.

#4 Davos Seaworth is guarding Snow’s body awfully carefully if there was nothing more to come.

#5 The Night’s King has unfinished business with Jon – and Jon may be the yin to his dark and evil yang.

#6 Daenerys (Emilia Clarke) needs two more Targaryens to ride her dragons and Jon might be one.

#7 Jon may be Lyanna Stark’s kid with Rhaegar Targaryen which would give him double magic.

#9 Jon being Lyanna’s son explains why Eddard refused Catelyn’s demands to send the boy away.

#10 The bloodstain left after they dragged Jon’s body away looks dragonesque – a hint of more to come?

There’s also some other tidbits to consider. If you remember the books, Catelyn Stark came back from the dead thanks to the sacrifice of the seemingly unkillable Beric Dondarrion and that was courtesy of the Lord of Light – the same force that powers Melisandre.

Perhaps GoT showrunners have decided to shift Lady Stoneheart’s reveal (aka undead Catelyn) over to Jon Snow. What we do know is that because the show has now outstripped the books in terms of content development, George RR Martin sat down with David Benioff and DB Weiss and filled them in on the plot.

Benioff and Weiss know where the books are going and are crafting the HBO show to that ultimate conclusion. There are several major players that Martin has indicate have a destiny that takes them to the end of the show – including Tyrion and Daenerys and perhaps Jon – who may become Azor Ahai.

Azor Ahai is like the GoT equivalent of Jesus risen from the dead – the legendary “Prince who was Promised.” Plus, Melisandre prayed to see Azor Ahai and she said R’hllor (the lord of light) “showed her only snow.” Perhaps he showed her snow, but meant “Snow.”

It’s fans fervent wish that Ser Alliser Thorne (Owen Teale) has not defeated Jon Snow – and that he will be revived and go on to a much greater storyline that just chilling (quite literally) at the wall. The darkness is coming, the walkers are descending and a prince of the lord of light is needed to extinguish it…

What do you think GoT fans? Do you think Jon Snow will come back to us? Or has he gone on to meet the old gods in the great beyond? Share your comments below and check back with CDL often for more “Game of Thrones” spoilers and news.