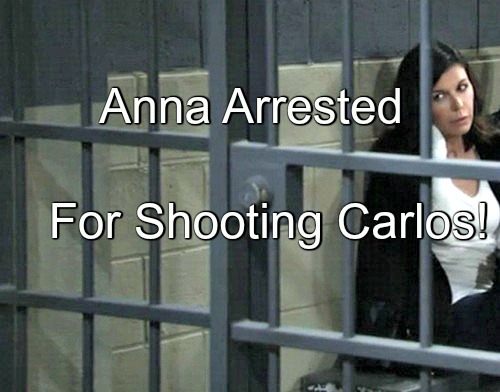 “General Hospital” (GH) spoilers reveal that Jordan Ashford (Vinessa Antoine) will be stunned to discover the depths that Anna Devane (Finola Hughes) has sunk to in her pursuit of vengeance for the killing of Duke Lavery (Ian Buchanan). Anna faces arrest back in Port Charles for several crimes.

Anna’s drugging of Paul Hornsby (Richard Burgi) seems to have thrown him for a loop and he revealed incriminating evidence to Jordan that Anna shot Carlos Rivera (Jeffrey V Parise) in cold blood. Jordan now has to press charges against Anna for assaulting an officer of the court and attempted murder.

Anna and Sonny Corinthos (Maurice Benard) are embroiled in a showdown with Carlos and we know shots will ring out on today’s show, but General Hospital spoilers indicate that all three will survive. But if Carlos were to die, that would be a big help for Anna and Paul.

Carlos has the goods on Julian Jerome (William deVry), Paul and Anna. We expect Carlos to live long enough to give testimony against all three because GH spoilers indicate both face consequences for their actions and Carlos being alive helps that plotline.

As Anna faces a criminal trial, GH spoilers indicate that Sonny will stand by her because he feels like she did the right thing and understands the motivation of revenge. Sonny will be loyal to Anna and this is a breeding ground for discontent with Carly Corinthos (Laura Wright).

Carly will resent Sonny getting attached to Anna even though Carly has her share of attachments with male friends. But Sonny’s commitment to Anna as she faces arrest and possible jail time could set the stage for romance between the mobster and former spy.

GH spoilers also reveal that it will be former DA Scotty Baldwin (Kin Shriner) that could be the one to save Anna from years in Pentonville for her vigilante antics. Sonny and Scotty hate each other, but they may work together to save Anna.

In addition to Sonny and Scotty, look for Griffin Munro (Matt Cohen) to support the woman who would have been his step-mother. Griffin has been preaching forgiveness, but he will still stick with Anna since she’s his primary link to his dad Duke.

We also wonder whether Paul and Anna might share adjoining cells at the PCPD while they await trial. Carlos knows that Paul killed Sloane and could testify to that. But of greater interest is that Carlos knows Paul is the one that shot Sonny – that bombshell is still waiting it explode…

What do you think GH fans? Will sparks finally fly between Anna and Sonny as they unite to fight for her freedom? Can dirty DA Paul escape justice for his shady actions too? Share your comments below and come back to CDL often for more “General Hospital” spoilers and news.