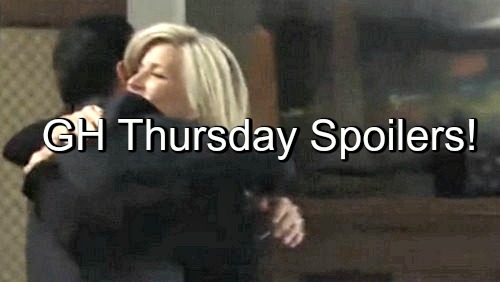 “General Hospital” (GH) spoilers reveal that Carlos is alive and back in Port Charles, but faces imminent danger on Thursday’s episode, April 14, plus Laura finds out more about the Helena puzzle, Dante plays cop at Wyndemere and Tracy worries her family. Check out what’s coming for tomorrow’s new episode on the next GH!

Laura Spencer (Genie Francis) is determined to get the answers to the puzzle left to her by Helena Cassadine (Constance Towers) and finally seems to be making some progress. Laura has an interesting talk with Dr Kevin Collins (Jon Lindström) about her quest. Plus, they will get cozy soon…

Paul has now activated plan B which is aiming Julian Jerome (William DeVry) at Carlos by warning him the Jerome hit man will testify against him. What will Julian do about Carlos? Carly catches Sonny up on Morgan Corinthos (Bryan Craig) but won’t mention her new friend…

Carly is warming up to Dr Hamilton Finn (Michael Easton) and will soon help him out of a crisis. GH spoilers for the Thursday episode show Finn shooting up again with his mystery substance. Other spoilers reveal he’ll be in a bad way soon and Carly will help him out.

Out at Wyndemere, Dante Falconeri (Dominic Zamprogna) is concerned about what he and Lulu Spencer (Emme Rylan) walk in on. Nikolas Cassadine (Tyler Christopher) is obviously battered and he and Hayden Barnes (Rebecca Budig) are arguing over ELQ and blackmail.

Dante wants to know what’s going on. Will Hayden lie to cover for Nikolas rather than ratting him out for her shooting even though she can’t get her blackmail goals? Hayden could easily tell Dante to arrest Nikolas for her shooting but GH spoilers reveal she will change direction.

With the stock, money and blackmail off the table, General Hospital spoilers ask if Hayden will decide love is enough for her and Nikolas? Also this week, looks like Lulu and Dante take advantage of some alone time at Wyndemere and rekindle their passion…

Now that Jason Morgan (Billy Miller) has the ELQ stock, he’s ready to make a big move that Sam Morgan (Kelly Monaco) wants him to seriously consider. Jason will break the good news to the Quartermaines – looks like he needs to head over to GH to talk to them.

And now that Jason is the majority shareholder at ELQ, will he hand over the stock to the Qs or step into the company to help run it?

Also on this week’s episodes, Kiki Jerome (Hayley Erin) talks to Franco (Roger Howarth) about her PTSD she’s suffering – every time she hears a loud noise, she freaks like it’s a gunshot. Since Kiki’s staying with Franco again, it’s a good opportunity for him to help her.

GH spoilers reveal Franco and Kiki will do art therapy together that results in breakthroughs for both. Franco gets some insight on his issues about having a biological child and Kiki is able to get some tools to help her cope with the aftermath of her shooting.

All this and more on the Thursday April 14 GH – don’t miss a moment then come back to CDL for more “General Hospital” spoilers and news.