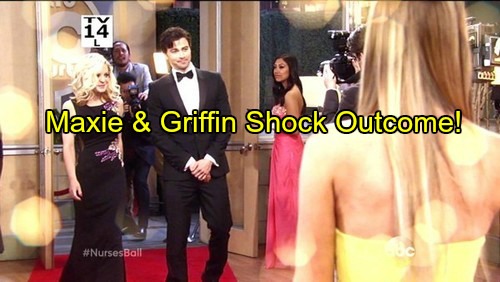 “General Hospital” (GH) spoilers reveal that on next week’s episodes Griffin Munro (Matt Cohen) will walk the Nurse’s Ball red carpet with Maxie Jones (Kirsten Storms). General Hospital spoilers examine what motivates this unlikely pairing since Griffin has told Maxie he doesn’t want to spend time alone with her? Will secrets be revealed about his past?

Nathan West (Ryan Paevey) is still recovering from the Carlos Rivera (Jeffrey V Parise) attack and is in no shape to go to the ball but no way will Maxie miss the biggest Port Charles fashion event of the year. So how do Maxie and Griffin end up on the red carpet together?

Griffin saved Nathan’s life in surgery and Maxie is very grateful but then Griffin mentioned that he owed Nathan. They were interrupted before he could explain his remark – if Griffin was willing to explain. No doubt Nathan will be grateful to Griffin for his surgical prowess.

GH spoilers tell us that Nathan still doesn’t seem to recognize Griffin and we’re wondering how long Griffin will let the detective stay in the dark. But will it be Griffin that comes clean to Nathan? Or will Maxie somehow ferret some secrets out of Griffin?

General Hospital  spoilers tease that Maxie leans on Griffin to escort her to the ball since Nathan is laid up. Will Griffin readily agree because he’s got residual guilt over his secret past with Nathan or will Maxie have to cajole Griffin into escorting her.

Maxie and Griffin both look super-hot on the red carpet and Griffin’s going to look much hotter later when he joins the guys on stage for the Magic Milo number. But we have to wonder how Griffin goes from revealing he’s a priest to revealing so much of his body…

Griffin just told Anna Devane (Finola Hughes) and Sonny Corinthos (Maurice Benard) that he’s a priest, although he’s not active, but then he inflames the lust of all the ladies at the Nurse’s Ball. What is this guy about that he would flip to the two extremes?

And will Anna be disturbed to look at Duke Lavery’s (Ian Buchanan) son mostly naked, particularly when she knows he’s a man of the cloth? Also, will Griffin come clean to Maxie about his past with Nathan? Or will Maxie discover the link when she links into Claudette?

GH spoilers tease that Griffin will soon find out something about his own past that he didn’t know before – and that may be a gap in his knowledge that Nathan fills in. Also, other spoilers hint that Claudette reaches out to Nathan in coming weeks.

Will this casual date of Griffin escorting Maxie to the Nurse’s Ball turn into trouble for Maxie and Nathan’s engagement? Will word of the priest status spread so that everyone knows they’re watching Father Griffin strip to his skivvies?

What do you think GH fans? Are you more excited to see Griffin and Maxie walk the red carpet or see Griffin shaking his stuff onstage? Will Griffin be uncomfortable escorting Maxie given his shady past with Nathan?