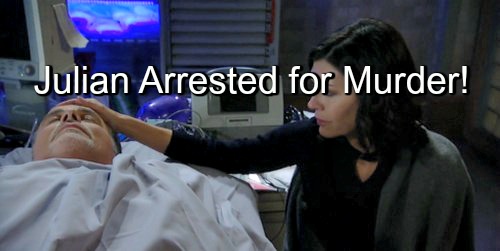 “General Hospital” (GH) spoilers reveal that karmic payback is coming for Julian Jerome (William DeVry) for the assassination of Duke Lavery (Ian Buchanan). It will be nearly a year to the day at the 2016 Nurse’s Ball when Julian is finally held accountable for Duke’s slaying.

GH spoilers for Nurse’s Ball 2016 reveal that the assembled crowd at the annual black tie event will be stunned when Jordan Ashford (Vinessa Antoine) slaps handcuffs on Julian. Most shocked will be Alexis Davis (Nancy Lee Grahn), Julian’s new wife.

Paul Hornsby (Richard Burgi) warns Julian that Anna Devane (Finola Hughes) and Sonny Corinthos (Maurice Benard) are pursuing Carlos Rivera (Jeffrey V Parise) so he can testify that Julian ordered Duke’s death. Can Julian stop them from getting to Carlos?

Nope. General Hospital spoilers say Anna and Sonny have a violent confrontation with Carlos on this week’s epsiodes but if Carlos happens to die before he can testify that would help Julian out a lot. We’ll have to wait and see how that goes but here’s what else is coming for Julian leading up to his arrest.

Julian has stepped back into his role leading the Jerome mob organization to protect Ava Jerome (Maura West). But this contradicts what he promised Alexis. Julian pledged to keep his hands clean but the ink on their marriage license is barely dry and he’s lying to her again.

General Hospital spoilers tell us that no doubt we can expect tons of drama this year as well. GH spoilers for May sweeps include the Nurse’s Ball action as well as Lucas and Brad’s wedding. But will the father of one of the grooms be unavailable because he’s cooling his heels in jail?

Lucas would be crushed if his dad can’t be at the wedding. And consider this – Julian often skates on the criminal charges he faces because Alexis is a super-lawyer. But will Alexis drop Julian as both a husband and a client once she finds out he’s back in the mob?

If Julian loses Alexis, he’s more likely to be convicted of killing Duke. Since Diane Miller (Carolyn Hennesy) is firmly in the Corinthos camp, she won’t take Julian’s case. That leaves Scott Baldwin (Kin Shriner) and rarely-seen Ric to take his case – but neither are as good as Alexis and Diane.

In fact since Rick Hearst is returning to Port Charles on April 25 it looks like Sonny’s brother might get the call to represent Julian.

Will Julian lose everything after his Nurse’s Ball arrest – his family, his legitimate businesses, his new wife, and the Jerome organization? Is this the end of Julian’s life as he knows it? Will he be sent to Pentonville with no hope of a reprieve?

No doubt there will be some Hail Mary antic that Julian can enact to save his skin. It’s doubtful we’ll see him in Pentonville pajamas for too long. It’s rare that any Port Charles mobster spends too long behind bars – so we wonder how Julian can slither his way out of this sticky situation…

What do you think GH fans? Are you excited to see Julian finally face the consequences for ordering Duke’s death? Do you want to see him lose everything including Alexis? Or do you hope he can weasel his way out of paying for his crimes?