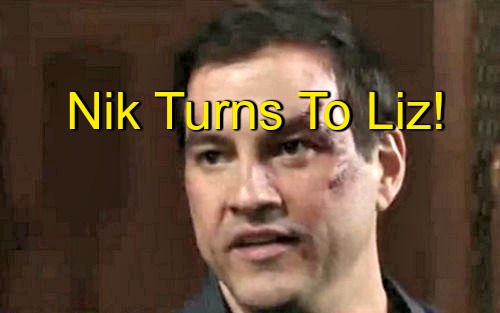 “General Hospital” (GH) spoilers reveal on this week’s episodes that we may see Liz Webber (Rebecca Herbst) and Nikolas Cassadine (Tyler Christopher) fall back into a romance after Nikolas loses everything. This week, Nikolas will be forced to hand ELQ back to the Quartermaines and will hit rock bottom.

Although Jason Morgan (Billy Miller) offers to buy the shares from Nikolas so he won’t walk away empty handed, he’s also still got to deal with the Hayden Barnes (Rebecca Budig) blackmail and drama. Will Nikolas have to give Hayden everything else he has left to buy her silence?

Liz has moved out of Wyndemere and is getting a place of her own – but will Nikolas soon be knocking at her door seeking shelter and a shoulder to cry on? We already saw that Nikolas asked Liz to stay the night with him at the MetroCourt and she did – was that the start of Liz and Nik 2.0?

Although Hayden insists she truly loves Nikolas, she’s still holding his feet to the proverbial fire over him hiring someone to shoot her (and who can blame her really). Nikolas told Liz that he still loved Hayden despite all of her lies, but General Hospital spoilers claim the affection will wear thin very soon.

Nikolas’ whole purpose in all of his dirty deeds was to secure Spencer Cassadine’s (Nicolas Bechtel) legacy and ensure he’s financially secure. But that seems impossible now with Hayden and Jason closing in on him and he’ll need somewhere to turn. Will Nik go to Liz? Likely.

General Hospital spoilers tease that Nikolas will look for comfort from Liz knowing she’s also alone and feeling betrayed by the last year’s sad turn of her life. But will Liz be available to him? We know Liz has been bonding with Franco (Roger Howarth) – will that soon turn to romance?

Instead of Liz being in a triangle with Sam Morgan (Kelly Monaco) over Jason, will Liz become the focal point of a love triangle between Nikolas and Franco? Talk about being caught between a rock and a hard place. Both are killers, both devious liars…

Nikolas and Liz did share a love once, but it was complicated by the presence of Lucky Spencer (Jonathan Jackson). But with Lucky now far out of the picture, could Nikolas and Liz have a real shot at love? Hayden sure seems to think that Liz has her eyes on Nikolas.

Plus, Liz went chasing after Nikolas after he took refuge at the MetroCourt and seemed to be making herself very available to him. But can Nikolas get past his complicated feelings for Hayden? Could Liz and Nikolas reunite but feel like they are consolation prizes to one another?

Can they forge a new relationship off such a murky start? GH spoilers reveal that Nikolas will turn to Liz in his hour of greatest need but will it be for one night of comfort or the start of something more meaningful?

What do you think GH fans? Do you want to see Liz and Nik reunited? After Britt and Hayden, Liz should seem like a saint to Nik, right? Share your comments below on the Liz and Nik reunited spoiler and check back with CDL often for more “General Hospital” spoilers and news.