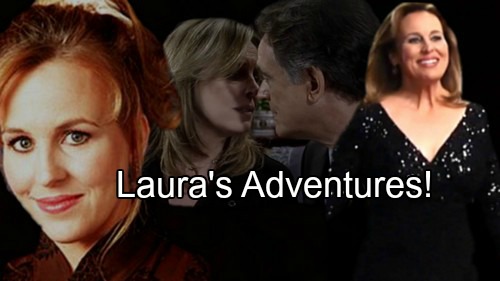 General Hospital (GH) spoilers noted a long awaited scene between Laura Spencer (Genie Francis) and Tracy Quartermaine (Jane Elliot) this week as the two were awaiting word of a DNA match between the bracelet and ring Lulu Falconeri (Emme Rylan) found in the tunnel on Cassadine Island.

Laura apologized to Tracy for abruptly interrupting her wedding to Luke Spencer (Anthony Geary) last year and had a heartfelt talk with Tracy regarding their love for Luke.

The mature conversation that ensued between these two veteran characters and the superb finesse of these two actresses produced a stellar performance that honored a huge piece of the tapestry that is General Hospital.

Longtime GH fans have literally watched Laura grow up onscreen. From her first appearance back in 1974, Laura (played by Stacey Baldwin for 2 years) as a victim of baby swapping, a storyline that soaps have used over and over again, has gone on to have one soapy storyline after another on GH.

General Hospital Spoilers took a glimpse back at some of Laura’s time on General Hospital showing her marrying young law student Scotty Baldwin (Kin Shriner), going to work and being raped by Luke Spencer (Anthony Geary), moving past that to become one half of the Super Couple Luke & Laura that still today defines Super Couples, running from the mob, having children, saving the world from being frozen by the evil Cassadines, being kidnapped, committing murder, losing her mind, being reunited with her long lost (and unbeknownst to anyone else) son Nikolas Cassadine (Tyler Christopher), losing her son Lucky (Jonathan Jackson) in a fire, finds out he is still alive, realizing she and Luke are truly over, slipping in and out of dementia, divorcing Scotty, rescuing Lulu, rescuing Lucky and Ethan, hearing that her son Nikolas is dead, finding him alive just to have him killed again.

General Hospital Spoilers thinks Laura has definitely paid her dues and earned some clearly laid out storylines in which she can shine and display her growth. Many GH fans, a vast majority in fact, have expressed liking the budding relationship between her and Kevin Collins (Jon Lindstrom). It seems to symbolize something she’s always really wanted, the stable guy you can come home to unlike Luke and Scotty.

Hearing her confide in Tracy that when people continue to treat you like a child you continue to act like a child and gently but firmly insisting that it was not her place to go after Luke felt like she was publicly declaring that Laura Webber Baldwin Spencer Baldwin Webber (?!?) is taking on a new role… as a Grown Up!

Okay, General Hospital fans, what do you think about the shift in Laura’s character? Do you think since the DNA results were not a match that she will stay true to her word and not fall back into her pattern of going to look for Luke?

Share your thoughts below and remember to come back to CDL for all your General Hospital spoilers, news and updates!