General Hospital Spoilers: Do You Like the Pairing of Laura and Kevin As A GH Couple? 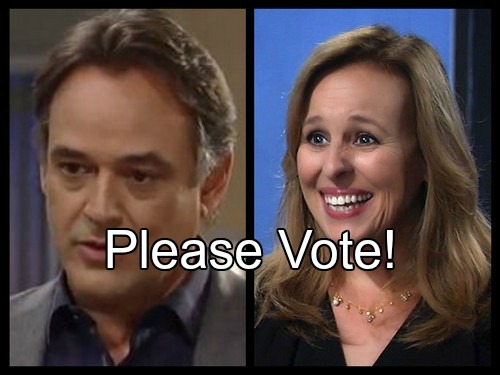 General Hospital (GH) spoilers are delighted to offer up a new couple as potential super couple material on our favourite and only ABC soap. The pairing which you are asked to weigh in on by voting in our CDL poll is Laura and Kevin – so you like them as a couple? General Hospital’s Laura Webber arrived in Port Charles in 1974. Child actress, Stacey Baldwin was the one who originated the role, but to fans, Genie Francis is pretty much the one and only “Laura” in our minds. She was a rebellious teen who brought nothing by trouble with her.

In 1978, her character’s popularity rose dramatically thanks to her pairings with rivals, Scotty Baldwin (Kin Shriner) and Luke Spencer (Anthony Geary).

Although Laura was married to Scott from 1979 to 1981, it was her GH romance with Luke Spencer that attracted so many fans, so much so that Luke and Laura’s 1981 wedding was viewed by over 30 million people, and it still considered to be the most remarkable TV wedding ever!

Even though they have divorced and remarried a few times, they still have a massive dedicated “L & L” fan base. Those were the banner days of General Hospital – if only the current group in charge of the show could learn from the past!

There had always been a bit of controversy between fans of the show on this pairing though. Some General Hospital fans could not understand how Laura could marry the man who raped her, a storyline that Anthony Geary, himself, did not like! When Anthony Geary decided to close the curtain on his character in 2015, it opened up the possibilities of Laura finally moving on from him, not that she was looking for love!

At the end of 2015, we see that Luke & Laura’s mortal enemy, Helena Cassadine (Constance Towers) passes away, taking all her secrets with her only leaving behind riddles to those gathered at the reading of her will. One of the things she had left was an empty book to Laura, which didn’t make a lot of sense to Laura because she knows that Helena always has an ulterior motive and it couldn’t simply be about a book.

Determined to find out what this all means, Laura hires a cryptographer named “Dr.K” and is pleasantly surprised to learn he is her longtime friend Dr. Kevin Collins (Jon Lindstrom). 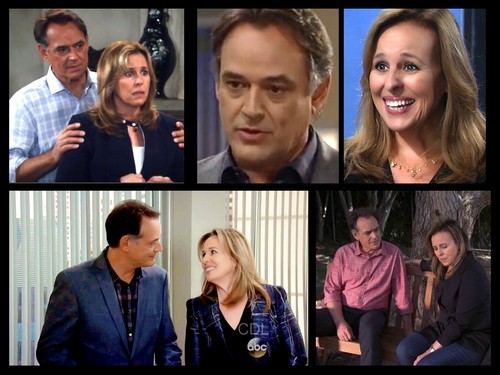 They put their heads together and start a journey of discovery. They find clues that send them to various places connected to Laura’s past, and somehow along the way this friendship is blooming into something far more, and to be perfectly honest, there isn’t a better guy out there for her.

This week proves to be a difficult one for them, as Kevin arrived unannounced on Cassadine Island, and ends up being a hostage with the rest of the group there. Although being surprised, Laura seems to genuinely care for him and trust him. Misfortune follows this new duo when Kevin takes a bullet meant for Laura.

After escaping Valentin Cassadine (James Patrick Stuart) and his goons, the group manages to get on a plane, with the intention of getting as far away from the island as possible, BUT, we all know the plotlines cannot be that simple. The plane runs out of fuel and they are about to experience a crash landing.

Will they all survive? Now that Kevin is gravely injured, and the adventure is coming to an end, do you think Laura and Kevin will give it a real chance? So tell us, do you love or hate them together? Are Laura and Kevin the next GH super couple – do you like them as a couple? Vote in the poll below and come back to CDL for all your General Hospital spoilers, news and updates!