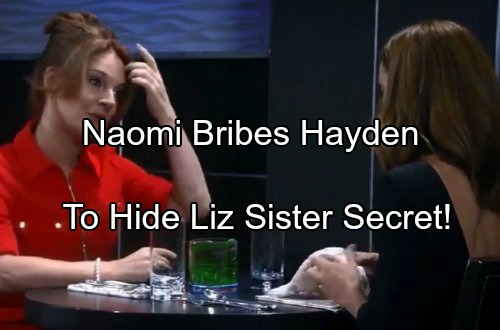 Hot new General Hospital (GH) spoilers tease that the Hayden-Liz sister reveal is about to boil over and Naomi Dreyfus (Robin Riker) is desperate to keep the secret. Naomi decides the best way to keep Hayden Barnes (Rebecca Budig) from finding the truth is to get her far away from Port Charles.

Fortunately for Naomi, Hayden is feeling really down about her life in Port Charles. She will show up to meet her mom for dinner fresh off a major confrontation with Elizabeth Webber (Rebecca Herbst) and Laura Spencer (Genie Francis) about the fate of Spencer Cassadine (Nicolas Bechtel).

Liz and Laura will discuss sending Spencer away to boarding school and Hayden flips out. Hayden was sent away by her parents and doesn’t want Nicolas to face the same hard time she did. Unfortunately, Hayden has no rights when it comes to Spencer.

Laura and Liz will remind her of that but Hayden has a motherly protective instinct towards Spencer and this gets her hackles up so the encounter doesn’t go well. When Hayden shares all of this, Naomi will be surprised to learn how much Hayden hated boarding school. 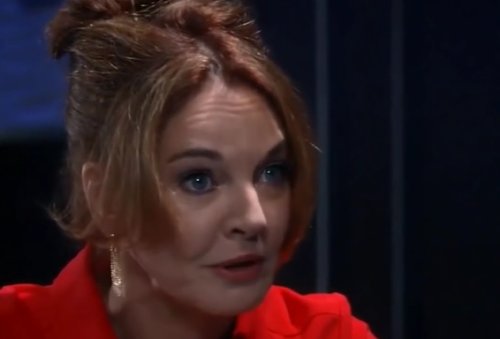 With Nikolas Cassadine (Tyler Christopher) supposedly “dead” and Spencer perhaps leaving too, Hayden will have no one much left in Port Chuck. Naomi realizes this and moves in for the kill by telling Hayden that she won’t get anything from Nik’s estate.

General Hospital spoilers reveal that Naomi will tell Hayden that Laura is the Trustee of the estate and she had her lawyers check it out and they told her Hayden will likely walk away empty-handed. Naomi is confident that this is enough to push Hayden into submission.

General Hospital spoilers reveal that after Naomi gives Hayden as much bad news as she can pile onto her daughter, she’ll move in for the kill by offering a bribe. GH spoilers show that Naomi will tell Hayden that she should just come back to New York City with her.

Even though she’s jobless and  won’t get her widow’s inheritance, Hayden will tell Naomi that going back to the Big Apple is the “last thing she needs” and that’s when Naomi snaps and gives away too much when she loses patience. 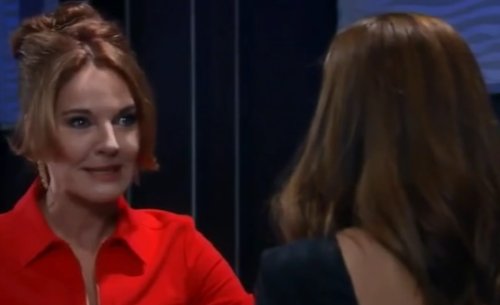 Naomi tells her daughter, “The last thing you need is to be anywhere near Port Charles or Elizabeth Webber.” Hayden’s jaw will drop and she says “What about her?” How can Naomi come back from this? Hayden has to know something is up.

Naomi was just telling her at GH the other day that Hayden should be nicer to Liz and now her mom has done a 180 and is saying Hayden needs to stay far away from Liz. Hayden will press her mother on what she means but odds are, Naomi is not ready to give up her dirty secrets just yet.

However, later this week, Naomi gets a phone call that scares her and it has to do with this long-held sister secret. It could be that Heather Webber (Robin Mattson) has decided to amp up her blackmail efforts. No matter what, though, it’s not likely Naomi can tempt Hayden out of town.

After all, no matter what family secrets are lurking, Hayden has a solid friendship (and possibly more) developing with Hamilton Finn (Michael Easton) and she’s not ready to call it quits on her dying lizard loving doctor pal – or Roxy the lizard. 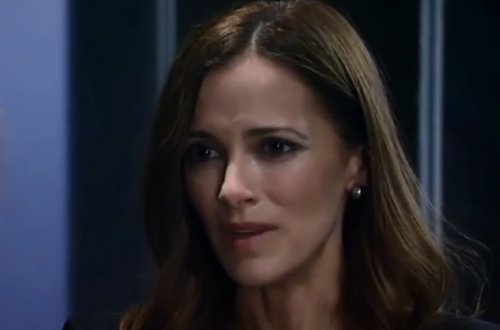 What do you think GH fans? How much longer can Naomi hide the Hayden-Liz sister secret? Will it be Heather that blabs the truth or will Naomi come clean before her secret spills out from someone else? Share your comments below and check back with CDL often for more General Hospital spoilers.