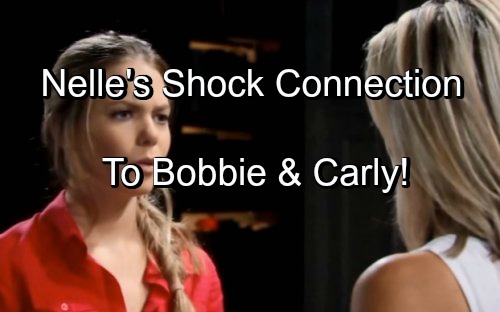 General Hospital (GH) spoilers has made it very obvious that there is a deep connection between Carly Corinthos (Laura Wright) and Nelle Hayes (Chloe Lanier), but hasn’t quite revealed how deep it really goes. Carly is overly protective of Nelle and is trying everything in her power to help her; and her insistence goes far beyond just being grateful for saving her daughter, Josslyn (Eden McCoy).

If you look back in General Hospital’s history, you will see that it is looking more and more like Bobbie Spencer (Jacklyn Zeman) could be Nelle’s biological mother. If Nelle is approximately in her early 20s, there are two potential fathers; neither of which would be welcome in Port Charles.

General Hospital spoilers remind us that After Bobbie Spencer and Dr. Tony Jones (Brad Maule), became friends with a young Carly Roberts (then Sarah Joy Brown), Bobbie’s life would never be the same. Carly was out for revenge on the mother who had given her up years earlier; even going so far as stealing her mother’s husband, yes that’s GH.

Carly and Tony went on to have a relationship, and even for a while Carly lied and said that the baby she was carrying was Tony’s and not A.J. Quartermaine’s (then Billy Warlock).

Around the same time, General Hospital introduced us to the other Jacks brother, Jerry Jacks (then Julian Stone). Jerry had come to Port Charles to meet his brother, Jasper “Jax” Jacks’ (Ingo Rademacher) fiancée, Brenda Barrett (Vanessa Marcil). GH history tells us he soon became infatuated with Bobbie Spencer and fell in love for the first time in his life.

Things were going very well between the two until the debacle that occurred at the Nurse’s Ball; a video of Jerry and Bobbie making love was accidentally mixed into Emily Quartermaine’s (then Amber Tamblyn) Nurse’s Ball documentary. Although embarrassed, neither Bobbie nor Jerry were worried about it.

Shortly after General Hospital’s Nurse’s Ball that year, Jerry almost dies in a car accident, and the thought of losing Jerry didn’t sit well with Bobbie, so they planned to get married. Unfortunately, during their wedding, Jerry gets arrested for laundering money from mobster, Moreno.

The FBI agent who arrested Jerry, was Bobbie’s former lover, Roy DiLucca (A Martinez, now starring on Days of Our Lives), a mobster and her brother, Luke’s (Anthony Geary) business partner at the Campus Disco.

General Hospital’s Jerry Jacks was released on bail, paid for by his brother Jax. Jerry asked Bobbie to leave town with him, but she said, “No”, and that was the last she would see of him, other than a Christmas gift he sent her shortly after he left town.

Bobbie, never being one who would stay alone, forgave Roy DiLucca for being the federal agent who ruined her wedding, and got back together with him. With Bobbie and Luke’s help, Roy took down his corrupt FBI Supervisor, Larkin.

Before things broke down between Bobbie and Roy; Roy was able to ruin Carly and Sonny Corinthos’ (Maurice Benard) life together. Carly had begged Roy to turn Sonny into the FBI in hopes that Sonny would agree to be in witness protection. When Sonny learned of Carly’s deception, he dumped her and Bobbie blamed Roy for all of it, and ended things with him for good.

General Hospital spoilers indicate that Carly and Nelle could in fact be sisters but if you had to choose, which man would you like to see as Nelle’s father, Jerry Jacks or Roy DiLucca? Either way, this could explain why Carly is so drawn to Nelle and how Nelle would have been compatible for the kidney donation. She would be Carly’s sister, and Josslyn’s aunt.

What do you think of this theory? Come back to CDL for all your General Hospital spoilers and news!